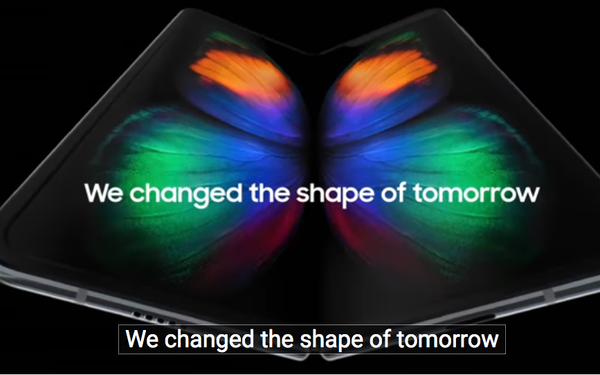 Uh-oh. Samsung is reacting to reports that a few sample versions of the new Galaxy Fold smartphone it sent to media to review have had issues.

A reporter for The Verge says that after only two days, his Galaxy Fold is developing a bulge near the bottom that definitely isn’t right. And Steve Kovach, the tech editor for CNBC, showed a photo of his Fold phone with one side showing bright white.

The most common problem though, is that reporters are saying their phones began to malfunction right after they removed the protective plastic layer from the screen. The problem is, removing that screen is customary for new smartphone users, but the Galaxy Fold requires that it stay in place.

Apparently there’s a notice that comes with the packaging that warns users not to remove the layer.  Samsung now says it will make sure that notice is a lot clearer before the phone officially hits the market a week from today on April 26.

Samsung issued a statement:“A limited number of early Galaxy Fold samples were provided to media for review. We have received a few reports regarding the main display on the samples provided. We will thoroughly inspect these units in person to determine the cause of the matter.

“Separately, a few reviewers reported having removed the top layer of the display causing damage to the screen. The main display on the Galaxy Fold features a top protective layer, which is part of the display structure designed to protect the screen from unintended scratches. Removing the protective layer or adding adhesives to the main display may cause damage. We will ensure this information is clearly delivered to our customers.”

The problems are similar (Samsung probably hopes not too similar) to the issues with Galaxy Note 7 phones in 2016, when design and battery problems caused a number of phones to catch fire or explode. Samsung eventually recalled all of them, and canceled the Galaxy Note 7 line. In sales and prestige, Samsung was stung.

Today Samsung stock was down 3% right after the news of the screen glitches started to circulate.

The Galaxy Fold has been long awaited, largely because of its fold-out display screen the company says will provide "more immersion, more multitasking and [the ability] to seamlessly transition apps from the front display."

Another reason the phone is noteworthy: It comes with a hefty price tag of $1,980.  Glitches like the ones reported might make some well-financed tech geeks decide to hold out.

Samsung is no doubt rattled by the pre-release mess, but its main introduction, the Galaxy S10, just released, set a company record for pre-orders,  and that includes a decade’s worth of Galaxy products.

The Fold was always intended to be for a more specialized market, at least in the beginning. Its pre-orders have closed. The company intends to make 1 million, compared to the hundreds of millions of Galaxy phones it creates every year.