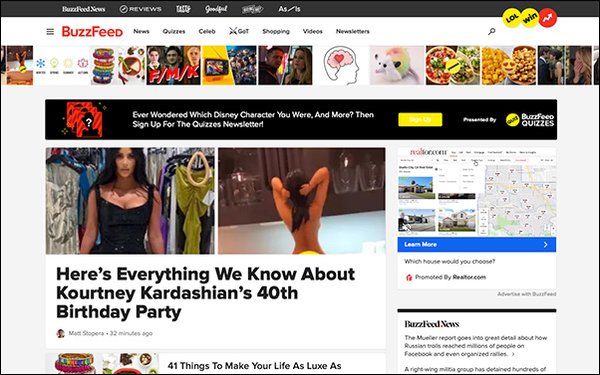 Hiring is up at BuzzFeed, even if employee numbers are still on the decline, reports Thinknum.

In January, BuzzFeed announced it was laying off 15% of its workforce as part of a restructuring to allow the company to invest in more profitable areas, such as content licensing and ecommerce.

At the time, BuzzFeed CEO Jonah Peretti said in a memo to staff: “Unfortunately, revenue growth by itself isn’t enough to be successful in the long run. The restructuring we are undertaking will reduce our costs and improve our operating model so we can thrive and control our own destiny, without ever needing to raise funding again.”

A couple of months later during a keynote speech at SXSW, Peretti told his audience BuzzFeed was approaching the future through a multipronged approach, including publishing across social-media platforms, creating high-quality content at low cost and focusing on in-house developed revenue streams.

According to Thinknum’s analysis of job openings at the company, BuzzFeed’s new approach is firmly in place with 77 job openings this week across teams, versus just 25 in mid-February. That amounts to an increase in hiring of 208%.

Job listings show a company “that relies on quantitative measurement and planning along with a focused eye on revenue,” says Thinknum. Openings include those for project-based editors, vice president, strategic business and corporate development, and business-operations interns.

They offer 12 posts across editorial and 16 across sales, in addition to ones in marketing. BuzzFeed News lost its vice president, news and programming, Shani Hilton, to the Los Angeles Times.

Thinknum notes that although the company is ramping up staff, its existing staff continues to shrink, per LinkedIn data. The numbers have continued to drop since the layoffs in January, and the company continues to fine tune its business plan.

Following the January layoffs, BuzzFeed’s remaining editorial staff moved to unionize. However, earlier this month, union leaders from the publication tweeted that company management failed to show up  for an official meeting at the New York offices of the NewsGuild to discuss recognition of the group.

The group was notified that management was not going to show up by human resources after the scheduled start of the meeting.

Union leaders wrote: “This meeting was a crucial opportunity to make progress in agreeing on a bargaining unit, after more than seven weeks of frustratingly slow communication with BuzzFeed. Instead, they abandoned today’s negotiations.           management is engaging in clear union busting.”