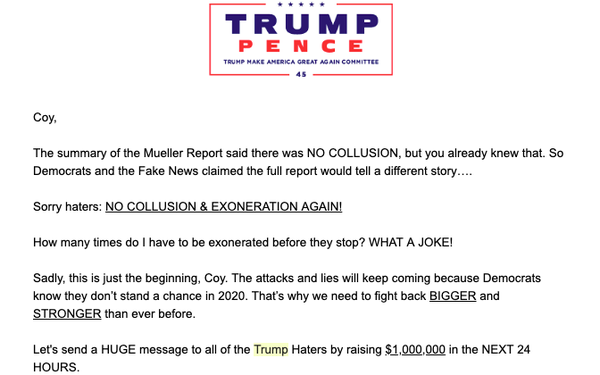 President Trump’s campaign was at the ready Thursday.

Claiming exoneration by the Mueller report released that day, it sent an email to supporters on the same day saying it wanted to raise $1 million within 24 hours, according to TMZ. The email reads like one of the President’s tweets.

The summary of the Mueller Report said there was NO COLLUSION, but you already know that. So Democrats and the Fake News claimed the full report would tell a different story….

It goes on to say: "The attacks and lies will keep coming because Democrats know they don’t stand a chance in 2020. That’s why we need to fight back BIGGER and STRONGER than ever before.”

Then it asks donors to "contribute $5 in the next 24 hours to help us CRUSH our goal and send a powerful message to the entire nation that this WITCH HUNT must end."