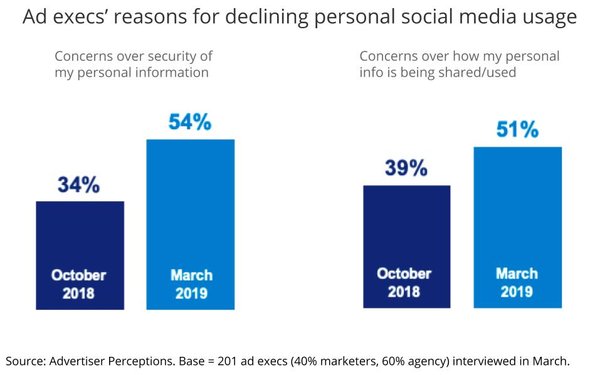 One of the not-so-surprising things I learned from Advertiser Perceptions’ benchmark study of the role “trust” is playing in media planning and buying decisions, especially the digital kind, is how ad execs relate to the topic on a personal basis.

Among other things, the study asked advertisers and agencies how their own personal use of social media platforms has been trending, and given what those insiders know about them, you also may not be surprised to learn it’s heading south -- significantly.

More than a third (36%) of ad execs say their own use of social media is ebbing.

Also not so surprising: that percentage correlates almost exactly with the percentage (35%) who report they are “highly concerned” about the negative risk of using the platforms personally.

The shift may seem obligatory, given overall societal concerns about social media and the fact that ad pros are even more acutely aware of how users’ data is used -- or abused -- but there also are some practical implications of the finding, which is one of the reasons Advertiser Perceptions is developing a new “trust index” to track the ad industry’s perceptions of media trust and its impact on how they plan, buy and evaluate media.

Keep an eye on the correlation Advertiser Perceptions has found between the personal and professional use of digital media platforms (see below) as the index is tracked over time.