Epic Battle To End All Battles Nears On 'Game Of Thrones' 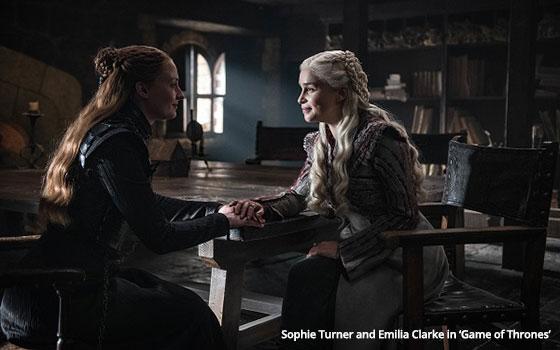 The second episode of the current and final season of “Game of Thrones” -- seen this past Sunday on HBO -- was mainly an hour of waiting for war.

As the episode ended, the army of the White Walkers was close enough to Winterfell that they could see it. An epic battle is now imminent.

It will be difficult, if not impossible, to delay it any longer. It is reasonable to expect this battle to commence at the outset (or near to it) of Episode Three this coming weekend.

From a filmmaking perspective, there is much riding on this sequence. This final run of “Game of Thrones” episodes -- comprising the show’s eighth and final season -- consists of just six episodes. If this epic battle is sustainable for the entirety (or close to it) of Episode Three, then what will be left for the remaining three episodes?

Perhaps one can speculate that there will be enough consequences left over after the battle for the remaining episodes to deal with its aftermath. In addition, since four episodes are left (including Episode Three), it might be reasonable to guess that at least some of the show's most visible characters will survive.

On the reverse side of that coin, a number of them will likely perish. This is what happens in TV shows nearing the end, in which there are so many characters whose fates and futures need to be decided in what little time remains.

One way to conclude their various storylines is to kill many of them off. From a storytelling point of view, an epic battle is the perfect way to do away with a number of them in one fell swoop. This also enables the show's vast, loyal audience to join in a pre-battle guessing game over who will survive and who will not.

The odds do not exactly favor a victory for the residents and warriors of Winterfell, so it will come as no surprise if most of them don't make it.

In many ways, the quality of this battle sequence represents a test for in-home entertainment (formerly known as “television”). This battle can be expected to marshal the full complement of special effects and live action available to filmmakers today to produce a battle sequence for the ages.

For all intents and purposes, it should rival the great battle scenes of the cinema, since the production capabilities exist to bring that about, and in-home entertainment equipment is sophisticated enough and big enough to do it justice.

It may even transpire that this battle will be grand enough to stretch over more than one episode of “Game of Thrones.”

An epic battle for an epic show sounds entirely appropriate.