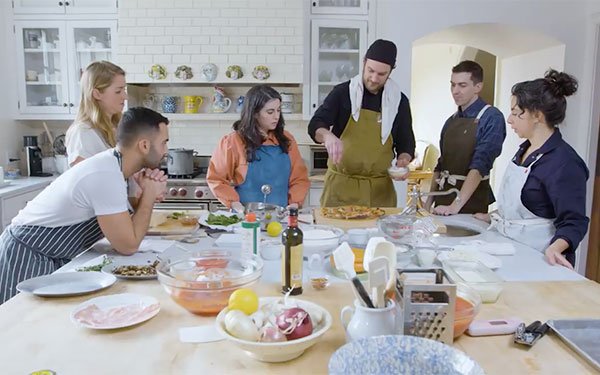 Bon Appétit premiered a new show today for its YouTube and over-the-top streaming channels, featuring the full test kitchen team coming together for the first time to make a perfect dish.

This season focuses on making the perfect pizza, with each episode dedicated to making one component of that pizza from scratch, such as the dough, the sauce, the cheese.

The success of Bon Appétit’s video began with Leone’s “It’s Alive” series, in which Leone talks to the camera while fermenting different foods in the magazine's active test kitchen.

At a press screening of “Making Perfect” on Monday, editor in chief Adam Rapoport said his favorite part about the new series is  it “captures the personalities of each [Bon Appétit] editor.”

Last night, Bon Appétit hosted a premiere party and pizza-making class for fans of the brand. Tickets sold out within 48 hours, with over 200 people on a wait list. It signaled a move by Bon Appétit to host more consumer events and interact directly with fans.

"Our entire event strategy at Bon Appétit is about building on our rabid video fandom and taking that experience offline where people can see, touch, and taste their favorite food brand," stated Bree McKenney, head of marketing and experiences for The Lifestyle Division at Condé Nast.

The title's other popular digital series include “Gourmet Makes,” hosted by Saffitz, and “Back to Back Chef,” hosted by Lalli Music. It plans to launch new series throughout the summer and fall.