Brit+Co. Lays Off Most Staffers After Traffic Declines 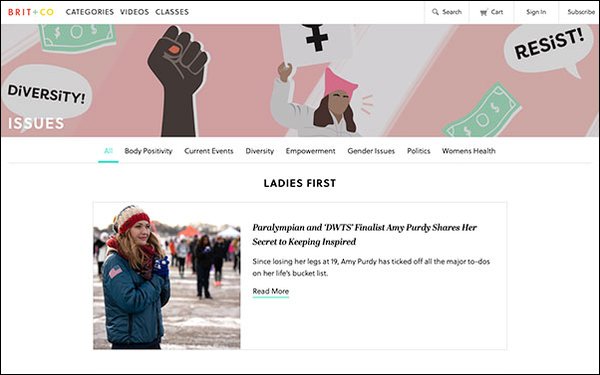 has let go of a majority of its staff, after acquisition talks fell through.

According to Recode, which first reported the news, the digital media brand with DIY and lifestyle content for millennial women employs about 50 people.

Several Brit + Co employees took to Twitter this afternoon to announce they were available for hire.

Traffic to Brit + Co’s desktop and mobile site dipped in the last six months from just over 4 million in October 2018, to 2.44 million in March, according to SimilarWeb data.

In a Medium post published yesterday, CEO Brit Morin referred to the company’s “next chapter” as a “reboot.”

“While Brit + Co has always had diverse revenue streams across advertising, ecommerce, classes and ticketed events, we have not been immune to the struggles of the industry,” she wrote in the post, citing industry challenges for “independent, digital publishers with advertising-centric models.”

Morin continued: “The next model will see larger media conglomerates continuing to serve advertising and streaming services at scale, while smaller publishers may begin to look more like direct to consumer brands: brokering distribution deals with larger platforms; launching subscription services; and bolstering ad revenue with e-commerce, licensing deals and other consumer services.”

Morin told staff Monday that the company is dealing with financial issues. “We see the Brit + Co brand being valuable as a brand and less as a digital publishing business,” Morin told Recode.

Last summer, the company's #CreateGood events were expanded to Los Angeles, after the successful launch of its first event in the series in New York City in 2017, which drew 10,000 people over five days and over 1,200 for the six ticketed events.

At the time, Morin told Publishers Daily event-based revenue had doubled every year since since 2013, when Brit + Co launched its first event, the Re:Make conference in San Francisco.