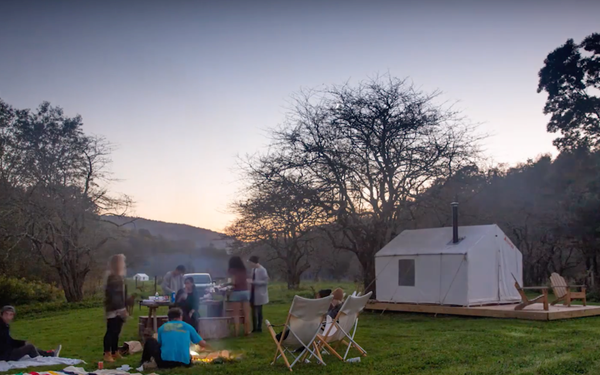 The travel experience company — think Airbnb, but with tents, queen-size beds and solar showers — now has sites in 33 states. It’s expanding partnerships, including with some hotel companies. And, starting in Maine this summer, it’s offering equipment-free camping sites in state parks, an arrangement it hopes to replicate throughout the country.

“What makes Tentrr special is that we have a standardized offering, with the same infrastructure in every site,” says Michael D’Agostino, founder and CEO. “Just as you know you’ll get a Heavenly bed and a bar of soap shaped like a leaf at every Westin hotel, every Tentrr site has a tent that’s already set up on a wooden platform, a camp toilet, a fire pit, a picnic table. We want to make the experience dirt-simple.”

Those booking a Tentrr site — 40% of whom have never camped before — get to experience a different kind of camping: It’s private, always the only site on private land, and chosen for some kind of “wow” factor. And because all the gear is set up, they don’t have to worry about putting a tent up in the rain or finding level ground.

CampKeepers, as the host landowners are called, earn 80% of the fee, typically $130 a night, and maintain the sites. But they also have the opportunity to sell other services and experience, which can range from seaplane rides, canoe and kayak rentals, to food, luxury bedding and firewood packages. “We’re encouraging them to be tent-treprenuers,” says D’Agostino.

“The experience is comfortable and stylish, and we’ve coupled it with hyperlocal things to do,” he adds.

D’Agostino was inspired to start the company when he was working in investment banking, and he and his wife arranged a last-minute camping trip one July. “We wound up stuck in the site closest to the bathroom. It was noisy, too bright, and there were mosquitoes. The worst was that there was some kind of convention going on and it was so loud. There was even a disco ball hanging from a tree. We felt like we were camping in Times Square.”

The agreement with Maine State Parks will focus on secluded sites, a key ingredient of the Tentrr experience, providing an opportunity for its primarily urban audience to really get away from it all.

Marketing includes digital, social and direct mail. Partnerships, like one with the Arlo Hotel in New York City, offer pop-up events to give people a sense of just how comfortable a tent can be. “It lets people engage with Tentrr and see what we’re like.”

And for recruiting landowners, he says the company has had success using radio. “In rural markets, it’s really affordable.”

D’Agostino spends as much time as possible exploring potential sites, and he and his wife have a Tentrr campsite at their weekend home in the Catskills.

The company has raised $17 million in venture backing so far. He tells Marketing Daily that about 60% of its customers are women and that the repeat bookings “tells us we have cracked the code, and created an experience that makes people feel good. They can go back to work Monday morning and say, 'You know what I did this weekend? I camped. I built a fire.’ They can feel proud of themselves, and yet we make sure it really isn’t that hard,” he says.

“The whole idea is to provide this launchpad for discovering the outdoors.”