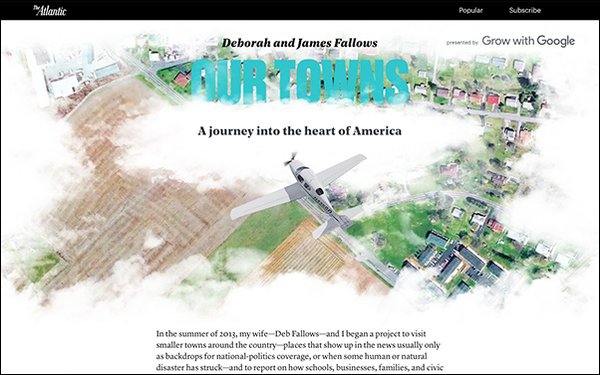 The Atlantic is expanding the cross-country reporting project, “Our Towns,” with support from Grow with Google.

The project is led by The Atlantic’s national correspondent James Fallows and linguist-writer Deborah Fallows. Since 2013, they have traveled 100,000 miles across the United States to report on the state of small cities and towns.

"Our Towns" is being relaunched, this time with underwriter Grow with Google, a program created in 2016 that aims to provide Google's training and tools to help build skills, careers and businesses.

This year, the program is bringing digital literacy workshops to towns across the country to provide learning opportunities for local citizens.

The Fallows will visit towns they haven't seen before and document their travels weekly through year's-end with a new landing page: theatlantic.com/our-towns.< /p>

"Our Towns" reporting will appear across all platforms at The Atlantic.

James Fallows pilots a single-engine prop plane to the towns across the U.S. The first stop is Indiana, with visits to Angola, Muncie, Indianapolis and Fort Wayne.

“The guiding principle of this reporting will be the one we developed — city by city, story by story, surprise by surprise— through our preceding years of travel,” James Fallows wrote in a letter to readers introducing the project. “The central premise is that the most positive and practical developments in this stage of American life are happening at the local and regional level — but most Americans have barely heard of those developments, except in the communities where they themselves live.”

Fallows has been with The Atlantic for over 40 years. He has lived and worked in Shanghai, Beijing, Tokyo, Kuala Lumpur, Sydney, Washington, Austin, Berkeley and Seattle. Fallows has authored nearly 100 cover stories.

The Fallows' first immersive reporting project for The Atlantic, called “American Futures,” became the best-selling book “Our Towns” in 2018. HBO is making a documentary based on the book.