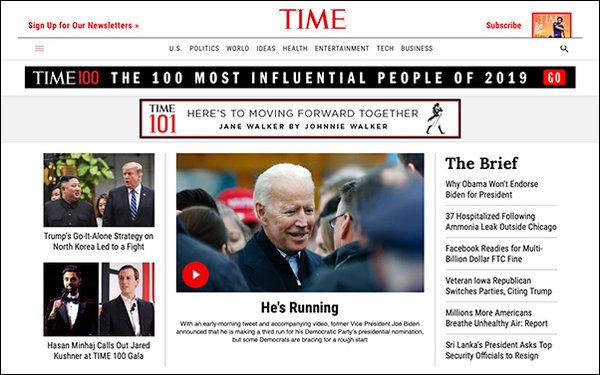 Employees of Time magazine’s digital publication are demanding to join a union that historically has been the domain of print employees.

Magazine staff yesterday notified management they want to join the NewsGuild of New York, a local chapter of the Communications Workers of America, which represents 3,000 newsroom workers, according to its website.

But its membership also includes employees of digital newsrooms at BuzzFeed News, The Daily Beast, Mashable and Quartz.

Time’s digital workers aren’t covered under the existing union contract, a distinction outdated in today’s media environment, employees stated. The existing contract only covers employees who can prove they spend at least 30% of their time working on the print publication.

“We want the same protections and benefits as our print teammates, who support our effort,” the statement said. “We want a seat at the table to work with management for more equitable salaries, improved benefits and increased diversity in the workplace.”

Management’s response to the unionization effort will be a sign of how much the company has changed under new ownership. Last year, Salesforce founder Marc Benioff and his wife, Lynne, bought the magazine from Meredith Corp.

Under Benioff’s leadership, Salesforce has racked up zillions of awards recognizing the company’s treatment of employees and efforts to pay men and women equally. The company spent $3 million in 2015 and again in 2017 to ““eliminate statistically significant differences in pay,” Quartz reported.

Benioff’s history of working to treat employees fairly where it matters most — in their pocketbooks — likely bodes well for the unionization effort.