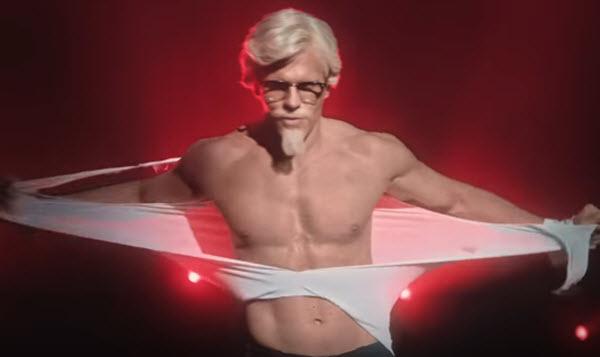 KFC is promoting a special Mother’s Day dessert biscuits offer with a video message that’s bound to get moms’ attention.

The minute-long video (below) — featuring actual male dancers from the famed Chippendales troupe doing a “shirt-ripping, finger-licking, Colonel Sanders-ized” routine — is being featured on YouTube and other KFC social channels.

Even better, it can be personalized (mom’s name and state) and shared with her via http://chickendales.com.

The food offer: Buy a KFC 10-piece or larger meal, and get four free Cinnabon Dessert Biscuits. (The treats can also be purchased solo, for $1 each, or four for $3.) The biscuits will be available from April 29 to June 30.

On Mother’s Day (April 28), KFC will also be airing a G-rated 30-second TV ad showing how a fortuitous bicycling accident supposedly resulted in the Colonel discovering a “collision” of KFC biscuits and Cinnabon cinnamon buns, inspiring the Cinnabon Dessert Biscuits.