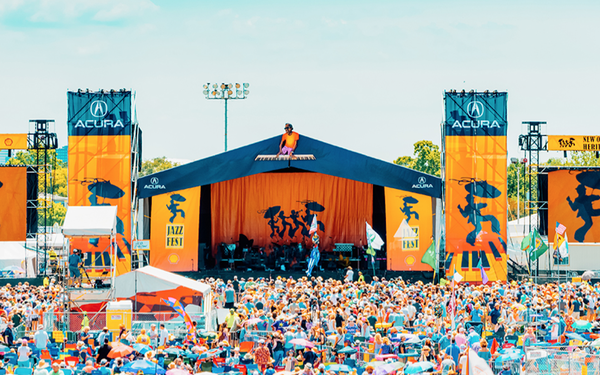 Acura is celebrating its 20th year as a sponsor of the New Orleans Jazz & Heritage Festival, which kicks off this weekend.

In addition to sponsoring the two weekends of Jazz Fest, Acura is sponsoring the Trombone Shorty Foundation for the fifth consecutive year and acting as presenting sponsor of this year’s "Shorty Fest.”

As part of the partnership, Acura will host performances on the Acura Stage and have the Acura Product Experience Tent onsite for festival-goers to view the automaker’s full model lineup, take complimentary photos in front of a New Orleans landscape backdrop and have the chance to win access to Acura's exclusive VIP Lounge.

The Acura Stage at JazzFest will once again be the festival’s main stage, with performers including The Doobie Brothers, Earth, Wind & Fire, Santana, Bonnie Raitt, Jimmy Buffett & The Coral Reefer Band and Trombone Shorty & Orleans Avenue with Nevilles.

The Acura Product Experience Tent is open to the public both weekends April 25 to April 28 and May 2 to May 5.

Acura also recently sponsored a group of 12 musically gifted students from The Trombone Shorty Academy with a visit to Los Angeles. Equipped with Acura MDX SUVs to get around town and GoPro cameras to commemorate their visit, the students met with professional agents in the music industry, practiced with the University of Southern California marching band, played a private performance at the American Honda Motor Co., Inc. headquarters in Torrance, Calif. and performed at the Acura Grand Prix of Long Beach.

Acura’s commitment to music also includes product design that aims to turn each vehicle into its own sound studio. Acura's ELS Studio 3D premium audio system debuted on the 2019 RDX and was developed through a collaboration between Acura and Panasonic and tuned by eight-time Grammy award-winning recording engineer and music producer Elliot Scheiner.