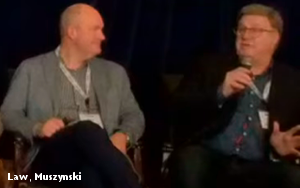 A panel discussion featuring some of Madison Avenue’s biggest network TV buyers Thursday morning accused the network TV industry of misrepresenting itself in the previous year’s negotiations, even to the point of explicit fraud.

Law was speaking about promises made by some major networks to reduce their prime-time commercial loads on the premise that it would improve their viewers’ experience and boost ratings and attention to advertising.

“I firmly believe they lied to us,” Law added, declining to name which network he was referring to, but it is well known that Fox and NBC took the most aggressive positions on reduced ad clutter pitches coming into last year’s upfront.

He described going into some kind of post-delivery meeting with network executives and said, “I’m a pretty casual guy and I dropped f-bombs in that meeting, because it is ridiculous.”

While he didn’t use the word fraud, Law said, the network sales executives “sold us on a proposition that you thought was going to happen.

“You paid more for something they told you was going to happen and none of it happened.”

“We heard promises last year that we were going to see a reduction in commercialization and the fact of the matter, with that particular network, who is now my client -- I would prefer not to mention who it is -- their commercialization actually went up by 2%,” echoed John Muszynski, chief investment officer, Publicis Media Exchange.

While he did not name names either, it is well known that one of his agencies -- Spark Foundry -- won NBC Universal’s media services account earlier this year.

While that was an especially sore point for the big network buyers heading into this year’s upfront negotiations, they all concurred that there fundamentally are other problems with the ongoing supply-and-demand equilibrium of the marketplace that requires a massive correction.

Citing an analysis of upfront media buys for the major broadcast and cable networks over the past five years, their prime-time ad rates have risen 38%, said Muszynski, while their delivery of adult 18-49 viewers declined 39.%

“That’s having it both ways,” he said, adding that agencies and their clients also have been hit with a variety of ratings and format packages that do not necessarily benefit advertisers, but are intended to boost the “yield” of the networks’ sales organizations.

“What we all up here get hit with is C Flight, C7, Open AP, Jazz Pods, Prime Pods,” he charged, adding: “All of these things are designed to increase their yield and not address the problem that marketers are facing with this dynamic of increased costs, because of shrinking supply.”

Dentsu Aegis’ Law said his team did an analysis looking back to 2001 and said “the number is actually worse” -- noting that prime-time ratings have declined 78% while ad rates have increased 180%.

“It’s a model that is completely broken,” Law said, adding, “If we come back and everybody walks back to the table with the same amount of money for television, like, shame on us, because it’s just playing right into their hands.”

In fairness, no one from the supply-side was represented on the panel, but all of the buyers were in agreement that this year likely would be one of massive correction, including shifting as much of their ad budgets out of the upfront and putting as much of it as possible into other media.