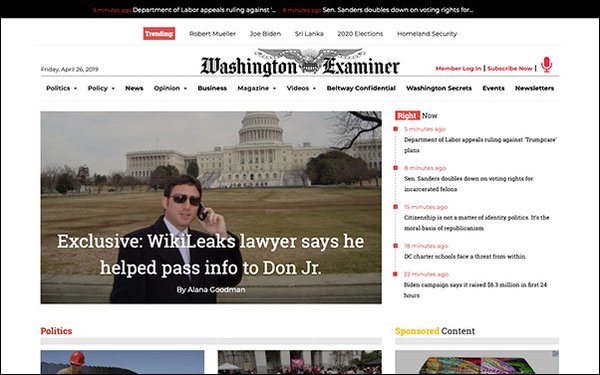 The Washington Examiner has overtaken TheBlaze as the second-most-trafficked U.S. conservative site, behind Fox News.

This is the Washington Examiner's third consecutive month of growth in year-over-year unique visitors, according to TheRighting’s analysis of Comscore data. It's also the first time it has reached the No. 2 spot since TheRighting began tracking traffic to conservative websites in September 2017.

“Attorney General William Barr’s summation of the Mueller Report March 24 undoubtedly helped drive traffic to Foxnews.com and other leading conservative websites,” stated Howard Polskin, founder, president-chief curator of TheRighting. “Conservative audiences were looking for news and perspective with a strong right-wing flavor about the Barr summation, and they found it in spades from a variety of sources.”

The site publishes more stories, and the company has hired more reporters to break exclusive news.

The third reason: “Readers today want authenticity rather than news stories that smuggle in a political/ideological agenda under a cover of ersatz objectivity," Gurdon said. "We're forthright about our conservative worldview, we give conservative people and ideas a fair hearing.

"But at the same time, we report news straight, so people need to read us even if they disagree with us," he adds.

Washington Examiner has also improved how it reaches online audiences. It now invests in identifying audiences and serves targeted content readers are more likely to engage with.

Washington Examiner was followed by TheBlaze, Washington Times and Breitbart, in that order.

In March, Breitbart continued its downward trend in year-over-year unique loses, for the 7th month in a row. Traffic dropped 18% compared to March 2018.

The site with the highest increase in unique visitors in March 2019 compared to the same month last year was Western Journal, with a 95% increase to 5.4 million visitors.

Newsmax dipped the most with 24% decrease year-over-year.