Sweetarts Gets Gen Z-Targeted Update, With 'Be Both' TV Spots 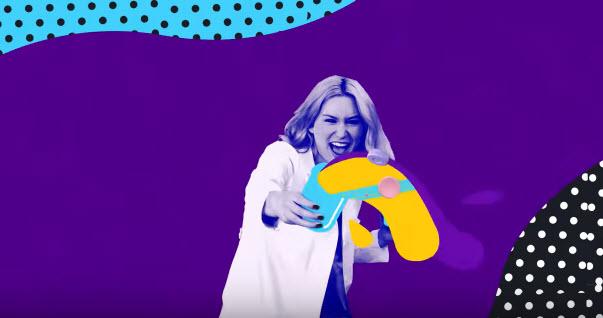 Sweetarts is the latest Ferrara brand to get its largest marketing push in years, thanks to new owner Ferrero Group.

The new campaign, “Be Both,” is designed to appeal to Gen Z, based on Pew Research showing that this most diverse generation to date rejects one-dimensional definitions of identity.

“Gen Z lives in a world where no one wants to be just one thing, or be forced to choose between multiple aspects of their personal truth," said Kelleen Peckham, director of brand strategy, Duncan Channon, Sweetarts’ new lead creative agency.

Four colorful, animated 15-second TV spots portray people who are revealed to be more complex than they first appear — a theme that’s tied back to the 56-year-old candy brand’s dual sweet-and-tart tastes and the different shapes and textures in its product portfolio.

One spot features a scientist who’s also an artist (above), with on-screen messaging that reads: “Science & art, sweet & tart… Sweetarts. Be both.”

Others feature a ballet dancer who’s both “graceful and gritty” (below); an older woman who’s “wise and wild”; and a shy teen who loves to dance (“shy and fly”).

The spots will air nationally on stations with concentrations of Gen Z (18 to 24) viewers, including E!, Comedy Central, ESPN, FX, IFC, MTV and Vice WWE, as well as on Hulu and social channels.

In addition, two :6-second digital spots (Long and Short and Hard and Chewy), to debut over the next month, showcase the brand’s various products, including gummies, ropes and a chewy version.

Sales of Sweetart Ropes grew at five times the category’s average during the 12 months ended April 2019, per IRI data, according to the brand.

"We see tremendous opportunity for SweeTARTS to connect with young adults who expect modern brands to understand and reflect their identities," stated Annie Meyer, marketing director at Ferrara Candy Company.

Italy’s Ferrero Group, which has its U.S. headquarters in Chicago, has in the past two years acquired Ferrara and Nestle’s U.S. candy business and, most recently, The Kellogg Company’s biscuits/cookies, fruit-flavored snacks, ice cream cones and piecrust businesses.

The strategy is to acquire brands that have been neglected and invest in improving their quality and marketing.

Sweetarts is the second Ferrara brand updating effort to debut this month, following a new animated campaign for Ferrara’s Trolli.

Other recent initiatives have included a major campaign for the “Better Butterfinger” and, starting last year, the U.S. launch of  the Kinder Joy candy-with-toy brand.