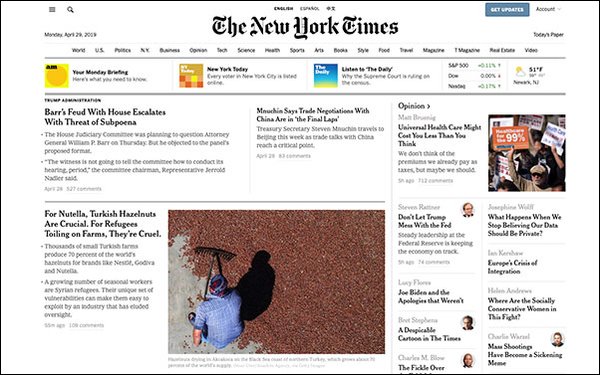 The New York Times announced new ad target offerings and events, as well as an emphasis on its TV-film commitment, at its NewFront this morning.

Times executives touted their high journalism standards, but noted that its stories can be told beyond the published word and across newer formats such as audio and video.

The Times announced that its popular podcast “The Daily,” hosted by Michael Barbaro, has reached 2 million listeners per day. The podcast has grown its staff from four people to 17.

President Trump, Barbaro told the audience, was one of the main reasons “we could sustain a daily newscast, because people were hungry for a sense of understanding” of the breaking news headlines churning out every day.”

"The Daily" is going global, with the help of Lynsea Garrison, international producer of the podcast. The show will soon produce a week-long series on populism in the U.K. and host a live event in London.

The Times also plans to expand its audio offerings on smart speakers, like the Google Home and Amazon Echo, and work with more brands. The idea: A reader can ask Alexa for more information and programming from The Times, such as its interactive news quiz.

Over the past year, every Times article was labeled with a “feels score,” matching content with a particular emotion it likely would evoke. This is one of many “perspective targeting” ad products The Times will offer later this year, Murphy said. The ads do not tap into a user’s browsing history, but target readers based on labels created by algorithms around The Times’ content. That protects the privacy of The Times’ 4 million subscribers, according to Murphy.

Originally called “Project Feels,” the “emotional targeting” initiative launched about a year ago and has generated 50 campaigns and more than 30 million impressions. The feelings, including “sadness,” “adventure” and “love,” are matched with an advertiser’s pitch, and a placement automatically drops into the digital article. Brands can target audiences through the content directly.

Murphy says this type of targeting has increased click-through rates by 40%, compared to the company’s “benchmarks.”

She believes regulations and consumer choice will soon change the way audiences share their data and how they can be targeted by advertisers. “We want to be on the right side of history,” she told Publishers Daily.

Emotional targeting will debut later this year, then expand to “motivation” ad targeting. That will score content based on the likelihood it will spur an action — and match brands that align with that action.

“Topic targeting” is also underway. Advertisers often choose to appear in sections of a newspaper, but this can be too broad an audience with a large newspaper like The Times, Murphy said. Brands can have ads appear beside more specific topics, such as immigration.

Lastly, “Campaignscope” will launch in Q3, Murphy said. It is currently in beta with The Times’ “biggest partners.”

Campaignscope scans the metadata of each site page (tags, section, “feels score”) and determines which niche topics will provide better click-through rates. For example, if an editorial project is tagged as “politics,” which might get a “pretty respectable” 0.18% CTR, Campaignscope can determine a smaller theme like “love” in the editorial that can increase CTR to 0.37%.

The Times also played a trailer of “The Weekly,” its new TV show coming in June to FX and Hulu. It uncovers the abuse at T.M. Landry College Preparatory school.

In addition, the newspaper is hosting its first food festival, October 5-6, in New York.

The food festival will bring together leading chefs, restaurateurs and The Times' food writers. The weekend-long event will have an outdoor festival at Bryant Park with tastings, live cooking demos, family-friendly activities and musical acts. It will also include a selection of curated dining experiences at 10 New York City restaurants chosen by Pete Wells, chief restaurant critic of The Times.

The food festival is sponsored by Mastercard.