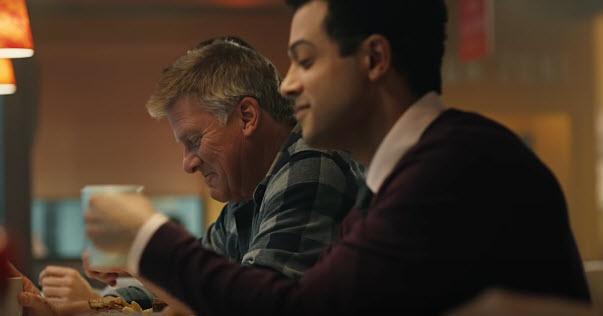 Denny’s’ new, multicultural campaign aims both to underscore its “America’s Diner” positioning by stressing inclusivity, and to invite consumers to come experience the improvements in its restaurants.

“See You at Denny’s” — designed, in the brand’s words, to “resonate with the modern American family” — includes an anthem TV/digital spot as well as ads specifically targeted to African-American and Hispanic audiences (all embedded below). The Hispanic spot is mostly Spanish-language.

The anthem ad shows diverse groups of friends and families enjoying themselves at Denny’s, with messaging, delivered by an African-American girl, that positions the restaurants as offering a comfortable, inclusive environment at a time of divisiveness in our country: “If you look around, we’re not all so different. We all want a friend we can talk to; we all want somewhere where we can be ourselves. A place where it’s okay to be different. And sure, there’s tension out there, but here, you leave that all at the door”…

The messaging also mentions that Denny’s has modernized its restaurants and introduced menu updates. Eighty percent of the chain’s locations have been remodeled, and most of its menu has been changed to address “shifting consumer tastes,” according to the brand. In addition, the chain has implemented new staff training.

“More than an ad campaign, 'See You at Denny’s' is a sign of our continued commitment across the organization to create a place where the modern American family can come together and connect over a delicious meal,” stated Chief Brand Officer John Dillon.

The campaign, developed by agencies including EP+Co, Conill and Fluent 360, will air nationally on TV, on online platforms including Hulu, YouTube and Vevo, and on Facebook and Instagram.

Denny’s is also promoting its record of supporting anti-hunger and minority advocacy initiatives.