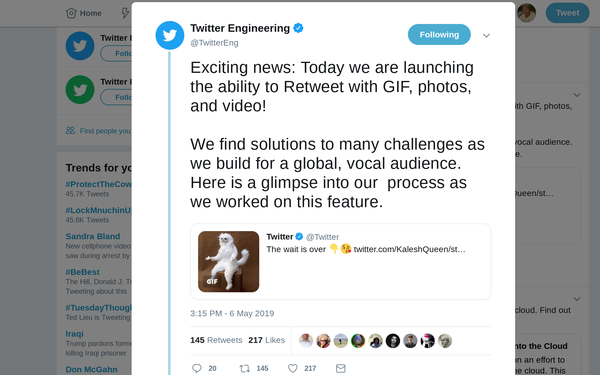 In a move that may be more significant than it sounds at first blush, now Twitter users can add photos and videos to items they’re retweeting.

"Starting today, you can do something new with your Retweets – add a GIF," Twitter announced.  "Now, the same photos, videos, and GIFs that you add to a Tweet can be added to a Retweet, making it easier to share what’s on your mind and join the conversation when you can’t find the right words."

The improvement makes it possible that a retweet could include a graphic or GIF that would significantly expand the number of people attracted to the original tweet.

For those who really need their tweets to be seen -- like those in news organizations, marketers and politicians who are counting on (and just plain counting) the exposure they’re getting -- retweets with graphics should be a solid improvement.

“The most exciting part of this project was that we were working on a feature that many people asked for," was one of the messages sent by Twitter’s Engineering account. "We find solutions to many challenges as we build for a global, vocal audience.”

Twitter has a habit of making changes and then undoing them when users complain. Last year it adjusted its timeline so that users saw “In case you missed it” at the top, a way for Twitter to give users highlights of tweets posted a little while before. But users just wanted to see their newest tweets, and Twitter changed back.

“Our goal with the timeline is to balance showing you the most recent Tweets with the best Tweets you’re likely to care about, but we don’t always get this balance right,”  Twitter wrote last September.

Twitter unveiled longer tweets in 2017, letting users write up to 280 characters, twice as many as the original 140 -- but got complaints when Twitter randomly reverted back to the old limit for some people. Twitter fixed that.

Still, even with the the added characters, typical tweets haven’t gotten longer, Twitter reports. The average tweet just use 33 characters, actually one character less than when 140 characters was the limit. But it did find people use fewer abbreviations or text “words” like "B4" and  "U R."