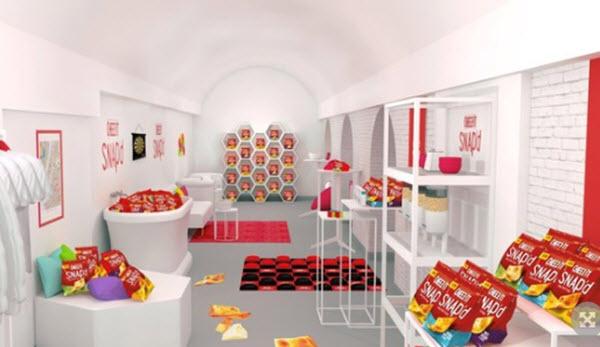 As part of the launch campaign for its Snap’d line of snacks, Kellogg’s Cheez-It brand has launched a contest to find a bunker-full of the snacks hidden somewhere in the United States.

The hunt ties in with the campaign’s overall theme: TV and digital/social ads claim that the new, “real cheese” snacks are so “insanely munchable” (the “perfect” TV-watching snack) that Cheez-It is worried the demand will cause a cheese shortage.

A TV/digital ad that launched in mid February has amassed nearly 18 million views to date on YouTube alone.

Now, “after seeing the snack fly off shelves, we wanted to ensure Cheez-it Snap'd were kept safe for our biggest cheese-loving fans” by hiding a supply in the bunker, declared Jeff Delonis, Cheez-It’s senior director of marketing, in the contest release.

The first person to find the bunker (above) will get a year's supply of Snap'd snacks, some of the contents of the bunker (including a giant flat-screen TV) and a year’s subscription to a streaming service.

The brand is promoting the contest with a video on social media (below) that generated nearly 200,000 views on Twitter alone in the first 24 hours.