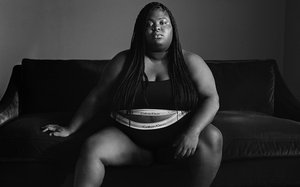 Calvin Klein is getting a little more personal, launching an ad campaign -- “I speak my truth” -- that promotes the idea of “radical vulnerability.”

And while there’s plenty of sexy young celebs in their undies in the spots -- singer Shawn Mendes and actor Noah Centineo offer plenty of the brand’s trademark hunks-with-great-abs looks --  the videos push all the young performers for more personal emotional content.

Musician Billie Eilish talks about why wearing baggy clothes makes her feel safe from judgment; rapper Chika (shown in photo above) waxes poetically about young women not yet comfortable in their skin; and Centineo explains why he’s proud of his scars.

The company says it is releasing the campaign videos in installments so that each of the young performers’ videos has a chance to get people’s attention. Future videos will include musician A$AP Rocky, models Bella Hadid and Kendall Jenner and actor Yoo Ah-In.

In its announcement, the company says it hopes the storytelling approach will encourage others to bare their souls, too, “to express ourselves freely and fearlessly, to let the world see us unguarded and unfiltered.”

The new campaign comes at a time when the brand is hoping to regain some former swagger. Back in March, parent PVH Corp. said the brand’s sales fell 2% in the most recent quarter to $953 million. And while international sales gained 2% to $523 million, business in North America weakened, falling 7% to $430 million, in part because of continued softness in its jeans business. Comparable store sales in the U.S. dipped 1%. And earnings fell to $44 million from $79 million, due to restructuring changes the company announced back in January.