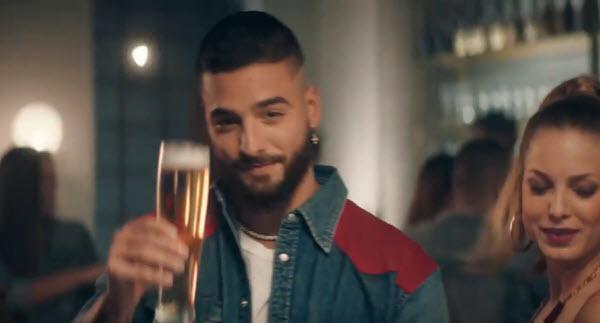 Michelob Ultra has extended its advertising deal with Latin music star Maluma to a new TV ad timed to coincide with his latest album release.

The spot, made in both English (below) and Spanish, is part of the brand’s push to reach U.S. Hispanic consumers and other new audience segments.

Featuring a song from the album, “Nuestro Ritmo (Our Rhythm),” the ad will debut on “The Tonight Show With Jimmy Fallon” on May 14 — when Maluma will also appear on the show to promote the album.

The spot was shot in Maluma’s hometown of Medellin, Colombia.

In line with the low-calorie beer’s “Live Fit, Live Fun” brand message, it shows the performer drinking an Ultra with friends amid his active work and social life, including dancing.

Maluma made his first appearance for Ultra in the brand’s SBLIII “Robots” spot.

The brand is also jumping on golf season with promotions that include its endorsement deal with Brooks Koepka.

Earlier this month, the brand challenged Koepka to drive a golf ball 120 yards, from New York City’s Governors Island onto a 20-foot barge with a simulated green that was floating in the Hudson River, to trigger a special offer.

Because Koepka made the “Ultra Shot” (memorialized on video), NYC residents who buy an Ultra six-pack are eligible to receive a $5 rebate in the form of a prepaid card.on May 16, the first day of the PGA Championship,