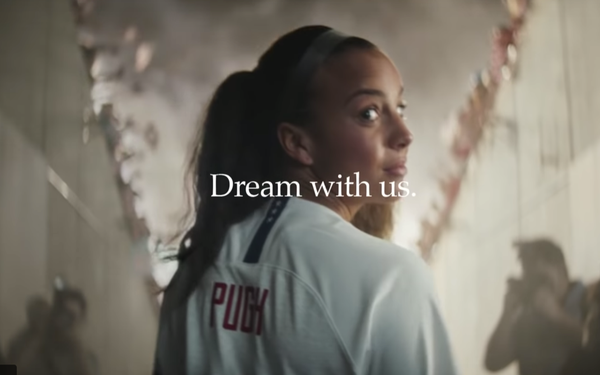 Nike is doing its part to stoke women’s soccer fever, releasing a powerful new “Dream with us” ad as part of its film series celebrating 30 years of “Just do it.”

But the new creative, released on Mother’s Day, was greeted by a searing op-ed video in the New York Times by Olympic runner Alysia Montaño, criticizing the company for its discrimination against pregnant athletes.

Nike considers women’s wear, which accounts for about 25% of its $36.4 billion in annual sales, one of its best growth opportunities. And with powerful marketing campaigns starring the likes of tennis legend Serena Williams, gymnast Simone Biles and pro skater Lacey Baker, it’s become one of the most powerful engines of viral pro-women content, with its videos shared tens of millions of times.

But behind the curtain, the Beaverton, Ore.-based giant is still trying to shake off lawsuits and allegations that it’s toxic boys-club culture is anything but gender-neutral.

In the op-ed video, Montaño, who became known as “that pregnant runner” when she competed at eight months, details the discrimination she felt from Nike, and later Asics, in a system that routinely stops paying women while pregnant and recovering from childbirth. She also criticizes the onerous confidentiality agreements that prevent women from talking about this issue in order to protect what's often their sole source of income.

“Great athletes never back down… that’s the warrior spirit that packs stadiums and sells sneakers,” she says, acknowledging how painful it has been to watch Nike run ads touting the possibility of combining motherhood with athletic championship while privately punishing athletes for pregnancies. “We’re the ones who tell our daughters the difference between dreams and advertising. So c’mon, Nike, when are you going to start dreaming crazy?”

Nike is still trying to shake off the harassment claims that went public last year. Nike’s CEO has apologized, and the company claims to be making steps to improve things.

The Portland Business Journal reports that a lawsuit against Nike's board of directors, alleging knowledge about widespread sexual harassment and gender discrimination, was dismissed several weeks ago.

But a separate lawsuit against the company, filed in federal court, is ongoing. And Nike is also defending itself against three different individual lawsuits about racial and gender discrimination.

The new soccer-themed spot comes as the U.S. Women’s National Team enters its three-game Send-Off Series, beating South Africa 3-0 in the first round. (Later this week, it faces New Zealand, all gearing up to the FIFA Women’s World Cup next month.)

Narrated by actor Viola Davis, the ad shows legions of young female athletes, aspiring to bigger dreams in soccer, football, gymnastics and baseball — some even dreaming of “being the first girl to play for the New York Yankees.”