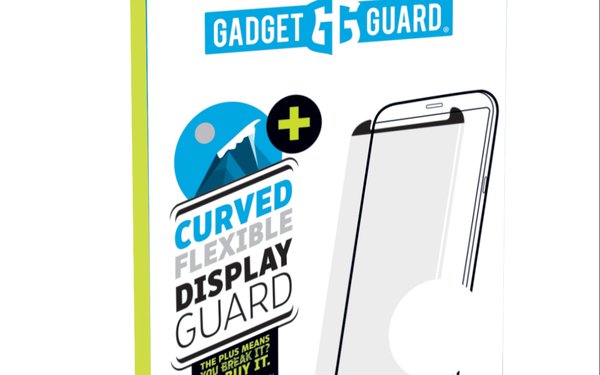 “To our knowledge,” it’s the first to market with the curved screen protector, the company says. It also accommodates new phone fingerprint sensors, an increasingly popular smartphone item.

Gadget Guard will next offer the Black Ice Flex protector on Apple phones, and possibly on other brands as well.

“It is a new technology that’s been introduced in screen protection,” explains Ryan McCaughey, chief technology officer at Penumbra Brands, which is Gadget Guard’s parent firm, in an email exchange.

“Flex is engineered in layers for optimum impact protection," he adds. "The top layer is a nano protective layer that provides a glass-like feel, the same sensory experience as the screen itself. The remaining layers are a combination of advanced glass-like composite material."

Brandon Bowen, vice president of sales, says the product is “by leaps and bounds, the most durable protection a smartphone user can employ.”

Most phone protectors use tempered glass, but new phones that offer fingerprint ID security usually can’t read through the extra layer. To alleviate the problem, some protectors now leave a portion of the screen unprotected so the security device works.

Gadget Guard says its new screen fixes that issue. The fingerprint sensors can cut those five layers of composite material. (Reportedly, the Whitestone Dome Glass brand, for $50, also can read fingerprints, according to the website WCCFTech.com)

There could be a receptive market for the protector because the curved screen is more prone to breaking, and could cost twice as much as other screens to get fixed if it’s cracked.

Even regular old flat screen phones shatter a lot. A survey for Motorola phones in 2015 (when it introduced a supposedly shatterproof phone) concluded half of all the people in the world with a smartphone have had a cracked screen at some point, and that 23% did nothing about it because they figured the cost outweighed the little cuts they might get on their fingers.

(By the way, in the survey, 34% of Americans said they have had cracked screens, which is nothing compared to the fumble kings and queens in India, 65% of whom have cracked screens .)

The next challenge for Gadget Guard should be the Samsung Fold, the now-delayed smartphone that folds out to create a larger screen. Those who sampled the early test models had trouble with an extra layer of glass Samsung itself put on the phone. Apparently, without it, the Fold didn’t work right. It told early testers (journalists, mainly) not to remove the sheeting — but many did.

McCaughey acknowledges that’s the next mountain to climb.  “Gadget Guard is currently working on a higher quality solution for the Samsung Fold than what is offered out of the box,” he says.