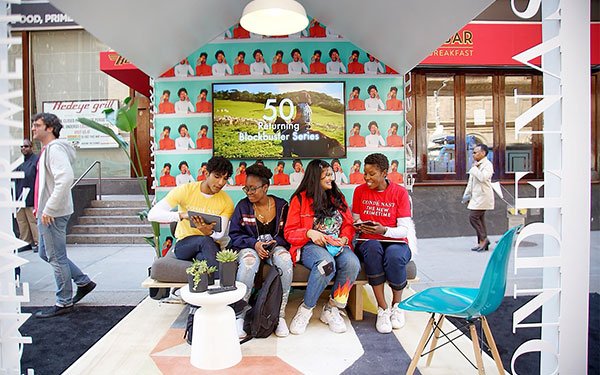 The Condé Nast NewFront, held a few weeks ago, centered around the magazine publisher's new tagline: “the new prime time.”

Condé Nast took this message to the streets of New York, setting up installations outside of the upfronts to attract media buyers and executives heading to presentations by the biggest TV networks showcasing their programming.

Eric Johnson, senior vice president of marketing at Condé Nast, called the activations a “physical manifestation” of the campaign touted at the publisher's NewFronts and in trade publications like Adweek.

Condé Nast is playing marketing videos on 80 digital screens across the city in areas “where people are moving around the Upfront locations,” such as subway platforms and a 155-foot billboard in Times Square, Johnson told Publishers Daily.

“We are canvassing Manhattan in key locations where those folks are attending the upfronts,” he added.

“Brand ambassadors” were spread out at specific subway platforms, as well as coffee shops in the area, wearing and giving away T-shirts that read “Condé Nast The New Primetime.”

The company also set up pop-up “living rooms” outside of Upfront locations. The house-shaped installation features a home-like setting, with a TV behind the couch displaying Condé Nast’s marketing video.

In a deliberate move, Condé Nast staff have their backs to the TV while on the couch. Instead, they are interacting with mobile devices like iPads and tablets from the couch, displaying Condé Nast video content.

The installation serves “as a reminder to a lot of those traditional TV buyers that there are new ways to reach audiences,” Johnson said. “Consumption habits are changing,” he added. The message is “follow the content and put yourself where the user is.”

The “living rooms” were set up in Dante Park, across from ABC’s Lincoln Center event on Tuesday, and outside of CBS’ event at Carnegie Hall on Wednesday.

Today, the pop-up is in the lobby of One World Trade, where Condé Nast is located and “a major agency" calls home. There was a “positive reaction” to these efforts, he said. Executives stopped and asked questions.

At the NewFronts, Condé Nast touted 50 returning video series from 2018 to 2019, and 175 new pilots slated for release over the next year. The publisher claims 14 billion digital video views in 2018, and launched two OTT streaming channels.

“We are providing more ways to engage with content,” Johnson noted.

Condé Nast also partnered with Nielsen to provide third-party measurements. Condé Nast commissioned a study from the metrics company that found an average 15% lift in brand familiarity and 36% lift in purchase intent from its digital video audience.

The marketing campaign will culminate with an activation at the InterContinental Carlton Hotel at the end of June for Cannes Lions, Johnson said.