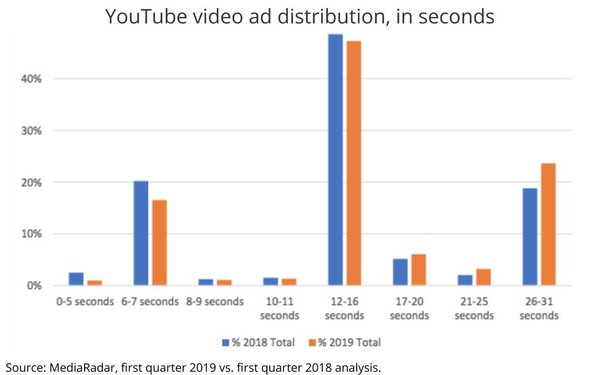 However, new research from the advertising intelligence platform MediaRadar suggests that ads on the video platform have slowly been getting longer.

MediaRadar ran an analyses of video ads across digital video platforms, including YouTube, from January 2018-February 2019.

The shift toward longer ads suggests that YouTube and advertisers are seeing value in the longer formats. Consumers may be acclimating to a video environment with slightly longer commercial interruptions or pre-rolls.

“It’s important to note that 15-second non-skippable ads were previously not available for auction to all advertisers,” said Todd Krizelman, CEO of MediaRadar. “However, recently, YouTube opened up the supply from a reserved model. This, plus the 2019 numbers, show a significant shift for YouTube — and could signal a category-wide change.

"It signifies that long-form digital video content still has a crucial role to play; possibly because longer video ads prove more effective, as they allow for more information to be conveyed.”

YouTube has made some significant changes to its ad model over the past year.

Most notably, it allowed certain creators to stack two commercials together, effectively recreating commercial pods from traditional TV. As Krizelman noted, the company has expanded the availability of 15-second non-skippable ads.

Fifteen-second ads “might be the video advertising sweet spot; balancing the desire to keep things short, but long enough to drive an emotional impact,” Krizelman added.

Of course, YouTube isn’t abandoning the six-second format. It is a format that still resonates with younger consumers. Just this past week, Google released a product called the ‘Bumper Machine” that is designed to allow marketers to quickly create six-second bumper ads.