PlayStation, Xbox Announce Plans To Work Together, As Streaming Proliferates 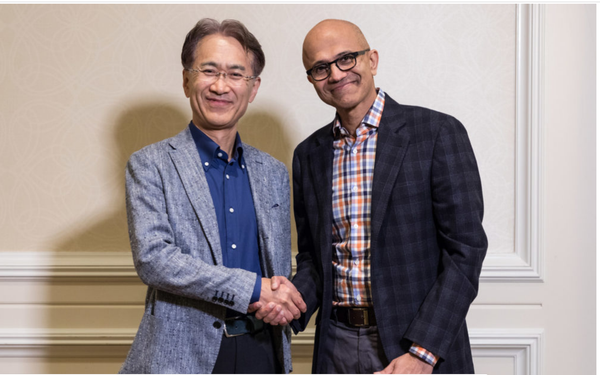 What does this mean? Sony and Microsoft just announced they’ll partner on “new innovations to enhance customer experiences.”

That wouldn’t sound odd at all  if these were just two big tech and electronics companies.

But Sony markets the Sony PlayStation gaming console and Microsoft markets the competing Xbox. So a partnership from that standpoint seems about as likely as Ford announcing a little link-up with Chevy.

“Under the memorandum of understanding signed by the parties, the two companies will explore joint development of future cloud solutions in Microsoft Azure to support their respective game and content-streaming services,” the joint press release says.

“In addition, the two companies will explore the use of current Microsoft Azure datacenter-based solutions for Sony’s game and content-streaming services. By working together, the companies aim to deliver more enhanced entertainment experiences for their worldwide customers. These efforts will also include building better development platforms for the content creator community.”

The partnership also lets Sony and Microsoft collaborate on AI ideas, and partner on a “potential joint development” of intelligent image sensor solutions.

The deal stokes new hopes that the two gaming giants could cooperate more on so-called “cross-platform play” solutions that would make it easier for Xbox or PlayStation users to share games or participants.

“PlayStation itself came about through the integration of creativity and technology,” says Kenichiro Yoshida, Sony president and CEO, in a prepared statement.

He adds, “For many years, Microsoft has been a key business partner for us, though of course the two companies have also been competing in some areas. I believe that our joint development of future cloud solutions will contribute greatly to the advancement of interactive content.”

Microsoft’s CEO Satya Nadelia adds,  “Our partnership brings the power of Azure and Azure AI to Sony to deliver new gaming and entertainment experiences for customers.”

Earlier this month, Xbox began selling the all-digital Xbox One S All-Digital Edition, retailing for $250. It doesn’t have an optical drive, which means it doesn’t play BluRay or physical discs, only downloadable games.

Digitally downloading content is the way the world is going, as streaming video has shown as it decimates the old DVD business. Microsoft is beta testing Project xCloud, a game-streaming service, and that’s at least in part because Google is launching Google Stadia, which supposedly will accommodate streaming games on any device. And Apple has its own streamer coming up, called Arcade. Similarly, PlayStation Now is Sony’s own streaming platform.