Food For Thought: How Data Changes What, When, Where, Why And For How Long You Eat 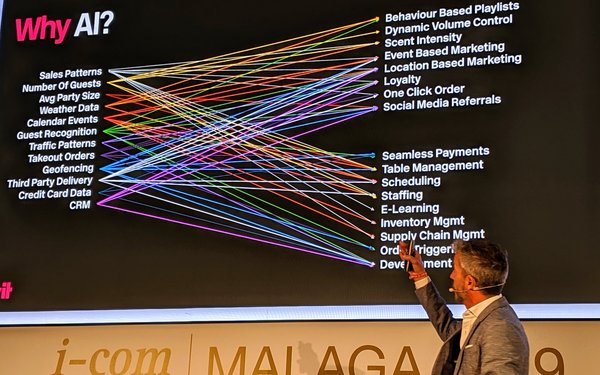 MALAGA, SPAIN -- I have seen the future of real-time data-based marketing and it’s inside a restaurant that will be opening in downtown Los Angeles in a few weeks.

The restaurant, which will be operated by Stockholm-based hospitality design firm Livit, is the 2.0 version of a living test lab it has been operating in Sweden for the past two years, and the most remarkable thing they both serve isn’t culinary, it’s data.

Most importantly, the data the restaurants use to optimize their consumers’ experience -- and patronage -- fundamentally isn’t digital. It’s real-world information that informs better real-world experiences that lead to real-world cash register ringing.

"It’s all invisible to the guest," Livit CEO Benjamin Calleja said during the opening keynote at the I-COM Global Summit here, referring to the flow of data and how it is applied to get people to come in, order more and stay the optimal length of time.

The restaurants do utilize an abundance of digital data, tracking every piece of data moving around their locations -- the MAC addresses of people’s devices, Bluetooth beacons, and even heat-mapping. They also track it inside, Calleja said, estimating that half the space inside the restaurants are affixed with some kind of “sensor.”

But the data is gathered and processed utilizing advanced AI and machine learning for one ultimate purpose: to improve its patrons’ experiences in a 100% frictionless way.

“They don’t even know they are part of a living lab,” Calleja explains, adding that their digital device data is just the tip of the iceberg. He said the restaurants also conduct real-world, in-person interviews with patrons -- buying them a cup of coffee in exchange for a few minutes of their input -- because as important as AI and computing power are, understanding the interpersonal emotional aspects of patrons is a vital component, too.

Calleja showed an example leveraging design to evoke surprising emotional responses in patrons: a sleek, black pizza takeout box designed to look more like an expensive jewelry box than the standard cardboard version (see image below). The box cost 10 times more than a standard pizza delivery box, but delivered more than a proportionate return on the investment, yielding a pizza price 27% higher than a standard pie. 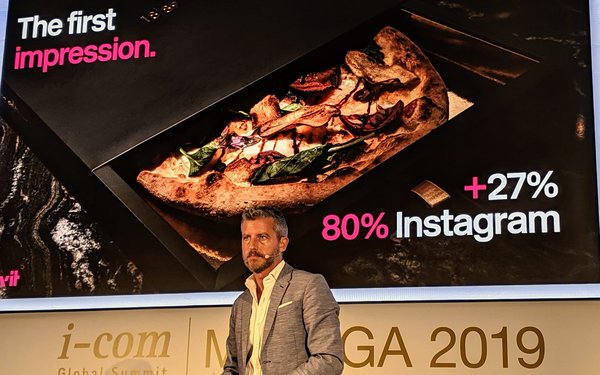 Calleja also showed examples of how his test restaurants utilize sound in the form of ambient music to influence patrons’ behaviors, getting them to stay longer or leave sooner, or order more of different items from the menu, simply by aligning the right tunes and sound levels with their unconscious emotional responses.

Using data from music database Soundcloud that aligns consumers’ unconscious emotional sentiment with brands, Calleja showed examples of lifts in brand sentiment, sales and even their inclination to order different items from the restaurants’ menu.

Even something as simple as boosting the sound level can lead to profound changes in consumer behavior he said, noting that when the audio was increased from 15 decibels correlated to a 10% increase in people ordering “more unhealthy food.”

By aligning the right audio, lighting and even scent experiences in a restaurant, Calleja said his labs have proven that restaurants can create “dayparting” effects to drive traffic and ordering at specific levels at specific intervals, which enables them to manage resources better on the backend, such as ordering supplies and staffing to appropriate levels.

When Livit changed the aroma in a pizza restaurant from a wood-fired oven scent to the smell of fresh basil, salad sales soared 13%.

Calleja did not say what new data innovations would be applied in the soon-to-be-opened L.A. restaurant lab, but he did provide ample location data to show how Livit optimized its location based on knowledge about where people live and/or work in the region.

He noted that situating the restaurant closer to where people work, optimizes lunch-time sales, whereas putting it near where they live increases dinner-time sales. 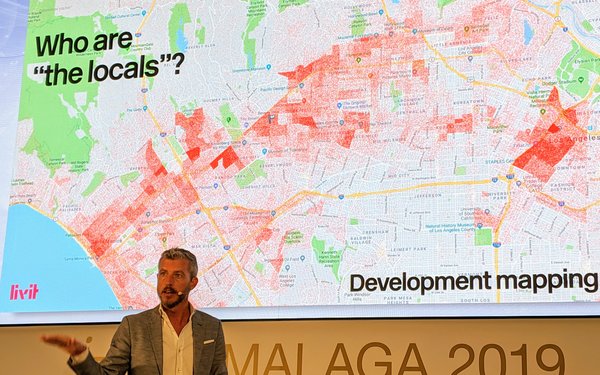 artificial intelligence, data management, digital, los angeles, real-time, research, restaurants
1 comment about "Food For Thought: How Data Changes What, When, Where, Why And For How Long You Eat".
Check to receive email when comments are posted.
Next story loading