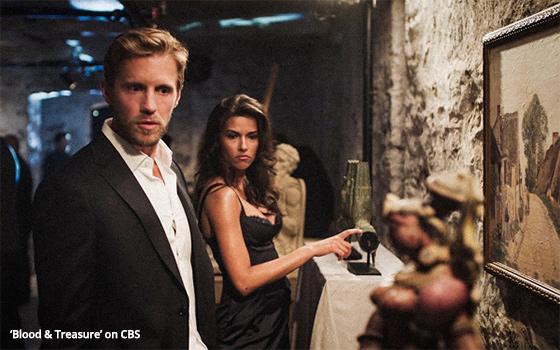 How many movies and TV shows can one new series crib from?

If the series is this new summer's scripted global adventure show on CBS called “Blood & Treasure,” then the answer encompasses so many pop-culture antecedents that space might not allow them all to be listed here.

But before we get to that, let's just say right up front that except for a few stutter steps at the outset of the two-hour premiere airing Tuesday night (May 21), this show eventually emits a frothy charm that can get under your skin.

And that's despite the fact that in this show plausibility and logical storytelling have evidently taken a long holiday, perhaps for the entire summer (if this show should last so long).

This show is about two mismatched sleuths who go chasing around after various bad guys involved in the black-market trafficking of priceless, stolen antiquities. In the globe-trotting premiere alone, our two swashbuckling sleuths -- she a beautiful thief and he a roguishly handsome former FBI agent -- make stops in New York, Monte Carlo, Paris, Istanbul, Rome, the Vatican and a few other such places.

With its wide-ranging globe-hopping, along with the narrow escapes that seem to accompany every such pit stop, this international search for treasure and secrets borrows from “The Da Vinci Code” and the two “National Treasure” movies with Nicolas Cage.

In its romantic pairing (obviously) of this mismatched hero and heroine (who come close to kissing about a half-dozen times in the premiere episode even while verbally sparring), this show borrows from myriad TV shows and movies. In fact, its nearest antecedent would appear to be the ABC series introduced (and then cancelled) just this past season called “Whiskey Cavalier.”

“Raiders of the Lost Ark,” anyone? All of the Indiana Jones movies come to mind as soon as “Blood & Treasure” adds some Nazis into the mix. This storyline has to do with an ancient Egyptian tomb in which Anthony and Cleopatra are interred in side-by-side sarcophagi, which -- come to think of it, brings a whole bunch of “Mummy” movies to mind also.

In one flashback storyline, members of the German Army’s Afrika Korps discover this tomb and in the process, are felled by evil. What this has to do with this present-day chase after black-market antiques dealers is not yet made clear in the premiere episode of “Blood & Treasure.”

It might have something to do with the Nazi fixation with artwork owned by others -- antique and otherwise -- that they had no problem stealing and then concealing in elaborate safehouses. This is the point where memories of the 2014 movie “The Monuments Men” would be revived, if I had only bothered to see it.

Not to insult anyone who worked very hard to create and produce this far-flung series, but “Blood & Treasure” plays like a B-movie version of all the previous sources mentioned above (and others not mentioned). And the cast includes few faces most people will recognize.

The locations seem real enough, however, and the action sequences generally achieve a quality somewhere above B-level. Dare I say it? The show was fun to watch.

Certainly, one’s appetite for international caper movies and TV shows is a matter of individual taste. On that score, people who like this sort of thing will probably enjoy “Blood & Treasure.”

It is a show that will not tax anyone’s brain or require anyone to think too much. Among other things, the arrival of a show like “Blood & Treasure” to prime time is as good a sign as any that the summer season is upon us.