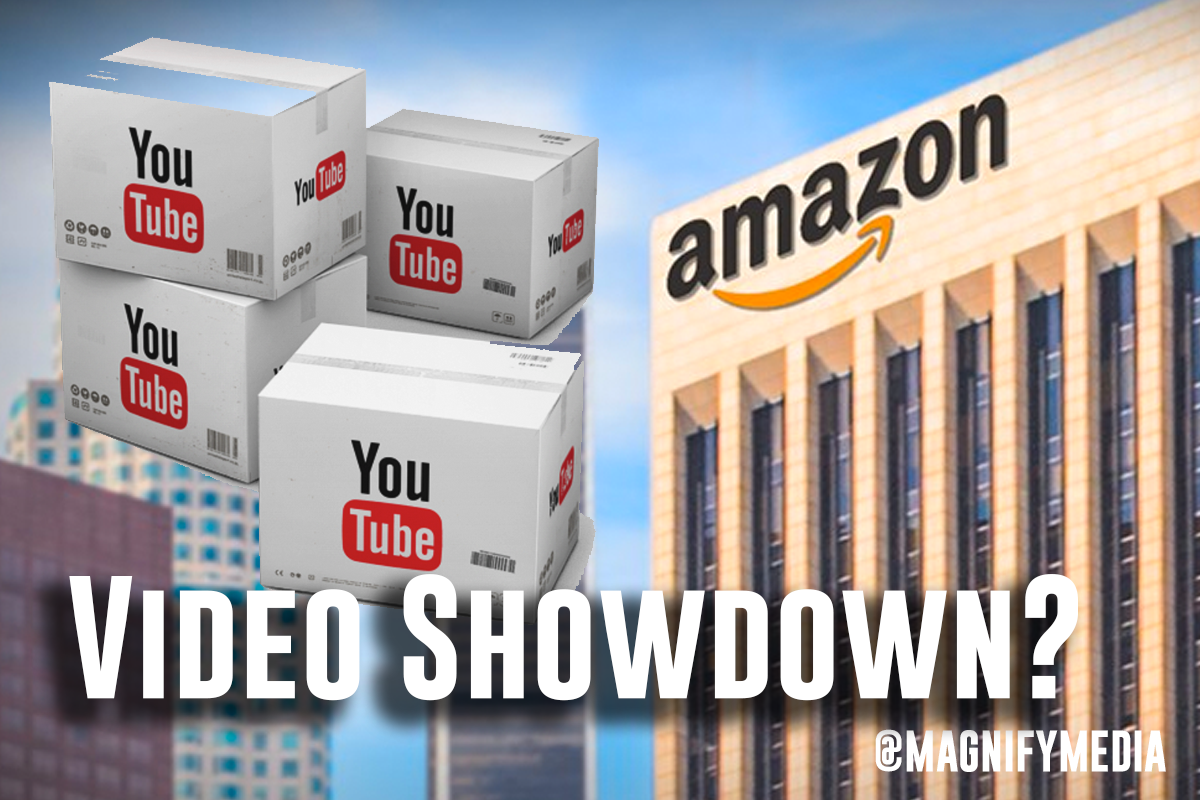 In 2017, Amazon filed two trademarks with the U.S. Patents and Trademarks Office that went mostly unnoticed.  The names were intriguing:  Amazontube and Opentube.

The descriptions detailed services that would provide “non-downloadable pre-recorded audio, visual and audiovisual works via wireless networks on a variety of topics.” The “online network services [would] enable users to share content, photos videos, text, data, images and other electronic works relating to entertainment.”

What’s interesting is Amazon’s history of launching direct competitors when it was in the midst of complex negotiations. When these names were registered, Amazon had just had YouTube block its Amazon Echo Show device. And you may remember what happened when Amazon was negotiating to buy diapers.com  and a number of other holdings from Quidsi. The sale closed at $545 million, but not before Amazon bared its teeth and threatened to take on the diaper direct sale marketer.

But the 2017 filing went nowhere and Amazon and YouTube appeared to resolve their dispute, with Google Home and Google Chromecast returned to sale on Amazon after a brief hiatus.

But now there’s a new flare-up of the pending video battle.

In January, Amazon filed a trademark application with the USPTO for the name FireTube. The description for FireTube reflects many of YouTube’s features. FireTube, Amazon says, would provide “online network services that enable users to share content, photos, videos, text, data, images and other electronic works.” The company says FireTube would also deliver “non-downloadable pre-recorded audio, visual and audiovisual works via wireless networks on a variety of topics,” among other tasks. Interesting.

And at the same time, Amazon-owned Twitch appears to be aiming its significant video platform resources at YouTube. Bloomberg reports that Twitch is reaching out to do deals with a number of popular streamers, from lifestyle influencer Gigi Gorgeous to actor Will Smith. Tanner Braungardt, a prankster from Kansas with 4 million subscribers on YouTube, has also signed with Twitch.

“There will be a steady drumbeat of lots of new content we’re bringing on,” Michael Aragon, Twitch Interactive Inc.’s senior vice president of content, told Bloomberg. “We’re growing well, and that makes us an attractive destination for people looking to do new things in live, interactive entertainment.”

Twitch is offering millions in minimum guarantees, and a share of ad revenue, according to people who’ve been pitched by Twitch.

So is Twitch a YouTube killer or just a live-streaming competitor? The platforms seem related, but not so similar that one replaces the other. Twitch is all about live, and YouTube is more of a video-on-demand offering. And, of course, Twitch is still mostly about live video gaming.

Worth remembering that YouTube tried to buy Twitch when it came up for sale, and may still be a bit frustrated that the sale went to Amazon, who back then had little experience in the video space.

Twitch is reaching 15 million daily visitors — certainly a powerful and growing audience that has YouTube looking over its shoulder.

There’s a big white space in web video, what used to be called the “long tail.” YouTube is the de facto owner, but with all the revenue coming from mass-media audiences, it’s easy to imagine Amazon seeing an opening for a new kind of video offering.