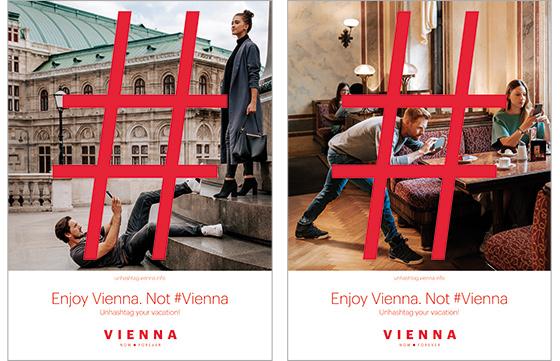 In its campaign “Unhashtag Vienna,” the Vienna Tourism Board illustrates how we experience the world around us while playfully urging travelers to ditch their smartphones and experience the city in a more engaged way.

Among the images, one scenario captures a woman taking a selfie in front of Gustav Klimt’s “The Kiss,” while another features a staged food composition at a traditional Viennese Coffeehouse. Two related images feature a couple in the midst of a Viennese streetscape and at the opera, both showing a boyfriend verging on public spectacle as he attempts to photograph his girlfriend.

The tagline “Enjoy Vienna not #Vienna” appears beneath each.

The campaign runs across print, digital, vehicle and projected wallscape ads in the U.S. and was created by Vienna-based creative agency Wien Nord.

In New York, the campaign debuted with OOH subway ads that included digital and posters, digital bus shelter ads and 2D projections around Google and Facebook NYC headquarters, among other elements.

The campaign also hosts a microsite devoted to taking a digital detox.

“To have the online community discuss this topic using -- of all things -- #UnhashtagVienna is proof of the campaign’s balancing act between the benefits and the downsides of online sharing culture,” stated Edmund Hochleitner, co-founder and chief creative officer at Wien Nord.

In service to its message of offline mindfulness, the tourist board has made analog cameras available to visitors to borrow in the first district of the city. Influencers in the photography and social media worlds were invited by the board to explore Vienna via camera rather than smartphone.