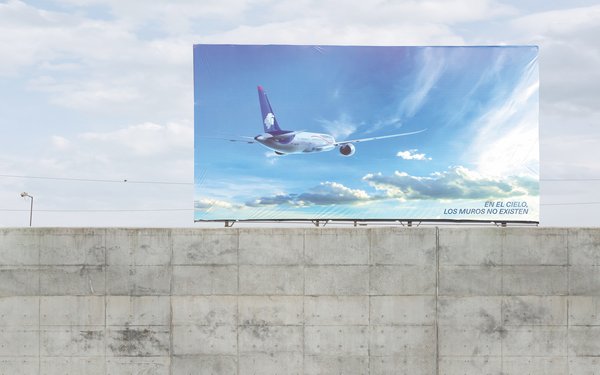 Aeroméxico is taking a stand on the controversial topic of the construction of a wall that stops Mexicans from entering the United States by foot.

The 85-year-old airline wanted to find a way to communicate hope in the country, while demonstrating a very simple fact: There are no borders in the sky, and there are no walls so big or tall that people cannot cross.

In the companies’ most recent campaign “The Over the Wall Billboard,” conceptualized by Ogilvy, Aeroméxico is placing billboards with images of its planes on top of huge walls in Mexico.

Three billboards went up in April in Mexico City and will remain until August.

The copy outlines the way to cross any border -- but even more important, about the unstoppable force of Mexicans, says Chany D’Amelio, Ogilvy vice president of creative services.

"Talking about a problem as complex as Trump's famous wall, we found an idea so simple but at the same time so powerful, to demonstrate that Aeromexico can fly over any type of border --and all this using the same medium to tell it." states D’Amelio.