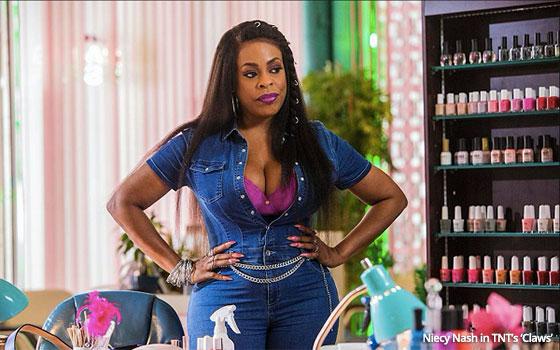 A new wave of women gangsters on TV are taking female empowerment to whole new levels.

They are increasingly expressing their empowerment with violence. And in so doing, they are beginning to act a lot like -- dare I say? -- men. Or at the very least, they are taking up positions on the wrong side of the law that on TV have been traditionally occupied overwhelmingly by male characters.

To achieve their empowerment (and monetary enrichment) goals, these women are taking up arms, and have become willing to commit crimes ranging from robbery to murder.

The trend is illustrated principally by three current prime-time dramas. On two of them, the women turned-gangsters were ordinary, law-abiding citizens until circumstances in their lives -- mainly a desire for more money -- led them into lives of crime.

The two are “Good Girls” on NBC and “Claws” on TNT. In “Claws,” which starts its third season June 9 on TNT, Niecy Nash (pictured above) stars as a nail salon owner who becomes a local crime kingpin whose crew is made up of manicurists and assorted friends.

“Good Girls” stars Christina Hendricks as one of three suburban women who turn to crime to improve their financial situations. The show has been renewed for a third season that will be seen some time next year.

In the third of TV’s current, gangster-gal series -- “Animal Kingdom” on TNT -- Ellen Barkin stars as a present-day Ma Barker. She is the patriarch of a southern California crime family consisting of herself and her grown sons who she manipulates and controls (or at least tries to) as it they are still children.

Unlike the women of the other two shows, the Barkin character seems to be a career criminal, and not a woman who once led a straight life but found it lacking in some way, and then turned to a life of crime. “Animal Kingdom” started its fourth season this week.

The question is: Is female empowerment supposed to mean women arming themselves to the teeth and being willing to adopt “any means necessary” to get what they want?

The phrase is often interpreted as an endorsement of violence, if “necessary.” It comes to mind when watching TV’s gangster women because watching them use violence to pursue their goals can make one wonder if this is the only way open to these women.

Certainly, violence is the path chosen by the creators, writers and producers of these shows for the entertainment value that crime stories are known to possess.

The women of “Good Girls” and “Claws” are really no different from Walter White, the Bryan Cranston character in “Breaking Bad” who saw only one way to provide for his family when he was dying of cancer -- go into the meth business.

Still, with women turning to crime on TV in increasing numbers to advance their positions of power and finance, we may have entered a new era in which the Tony Sopranos and Walter Whites of the TV crime world are now passé. In their place are new generation of TV crime kingpins. Or maybe we should call them “queenpins.”