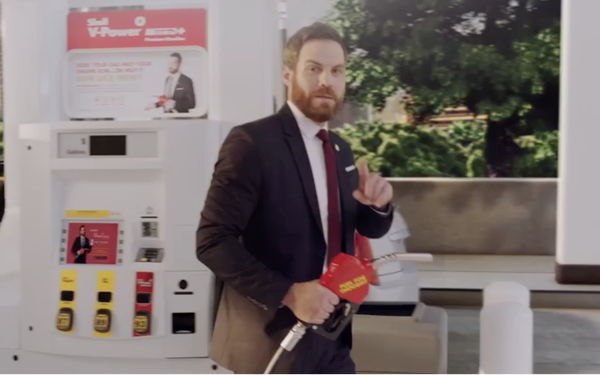 Shell is promoting its premium fuel with a campaign featuring actor Brent Bailey.

The fuel is Shell V-Power NiTRO+ premium gasoline, which the company says provides four levels of defense against gunk, wear, corrosion and friction to help keep your engine running like new.

Bailey will appear in TV, radio, digital, social and print. The goal of the campaign, from J. Walter Thompson Atlanta and  Mirum San Diego, is to help consumers recognize that all premium fuels are not the same, according to the company.

As part of the “Fuel for Thought” campaign, Shell is bringing Indy’s “Most Rewarding Gas Pump” to Indianapolis for the Indy500 weekend. On Friday and Saturday, visitors who participate in the “What The Pump?” trivia game can win free gas gift cards and other prizes. Race fans are invited to test what they think they know about premium fuel, the Indy 500 and Team Penske drivers.

The “Most Rewarding Gas Pump” will also be visited by IndyCar driver Josef Newgarden, who will be tipping off fans about the pump’s whereabouts.

Shell will continue to celebrate at the Indy 500, where 2017 NTT IndyCar Champion Josef Newgarden will be driving the freshly painted No. 2 Shell V-Power NiTRO+ Chevrolet race car for team owner Roger Penske.

As part of the fuel launch, “The Shell Great Gas Giveaway” will offer more than $1 million in prizes to new and existing Fuel Rewards Program members. Through Sept. 1, Fuel Rewards members will be automatically entered to win, including the grand prize of free fuel for a year, which will be awarded daily to four winners. Customers earn one entry for each regular-grade or mid-grade fuel purchase and four entries when they purchase Shell V-Power NiTRO+.