Driverless Cars Working Together Could Speed Up Traffic 35%: University Study 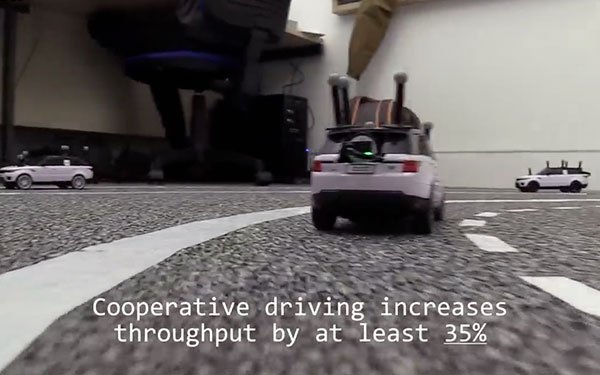 When driverless cars are communicating with each other, overall traffic flow could be improved by at least 35%, according to a study conducted by researchers from the University of Cambridge.

The researchers programmed a small fleet of miniature robotic cars to drive on a multi-lane track and then observed the traffic flow when one of the cars was stopped.

When the cars were not driving in connected mode, any car behind the stopped car had to slow or stop to wait for a gap in traffic to pass the stopped car.

When the cars were communicating with each other, as soon as one car stopped, it notified all the other cars. Other cars near the stopped car then slowed slightly so cars behind the stopped car could change lanes without having to stop or slow significantly.

A further test involved adding an aggressive human-controlled driver into the mix. As that car moved around the track, the other cars were able to give way to avoid it.

“Autonomous cars could fix a lot of different problems associated with driving in cities, but there needs to be a way for them to work together,” the researchers stated. “If different automotive manufacturers are all developing their own autonomous cars with their own software, those cars all need to communicate with each other effectively.”

The researchers adapted the cars with motion capture sensors and a Rasberry Pi, so the cars could communicate by Wi-Fi.