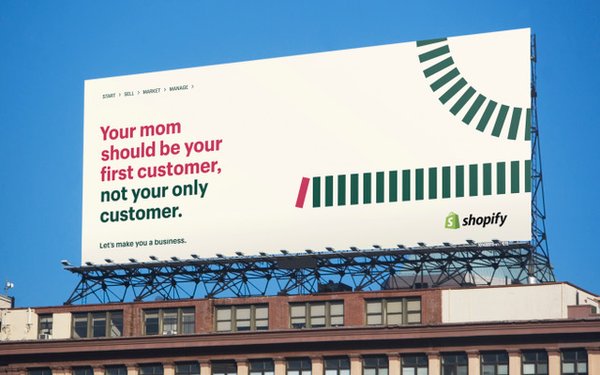 Shopify, sometimes called “the Amazon of small businesses,” knows a thing or two about D2C success stories. Both Allbirds and Kylie Cosmetics are its merchants.

So it’s hardly surprising that, as it looks to move to its next level of growth, it is following the D2C trend toward mainstream advertising. It will launch a TV spot as part of its “Let’s Make You A  Business” ad campaign.

Jeff Weiser, Shopify’s CMO, has plenty to say about what the platform is learning from its more than 800,000 merchants. “We’re very much the pick and axes in the D2C gold rush,” he says. “But we also reflect in our own marketing choices what we see in our merchant base.”

The company is ready to target a broader base. With a marketing budget of $30 million this year, “we aspire to become a household brand,” says Weiser.

The campaign “hinges on this important idea that there’s a big difference between making something, and making a business,” he tells Marketing D2C Weekly.

It also focuses on Shopify’s ease of use. ”We took something very complex and made it simple. It used to be that if you wanted to start any kind of business, you either had to be technical yourself or hire an army of engineers. We can get you up and running in next to no time,” adds Weiser.

The new campaign, which kicked off in April, is the first integrated effort the brand has ever done.

The Ottawa-based company, which started back in 2004, worked with agency R/GA to develop the campaign. And while its use of TV and out-of-home targets a broad audience, Weiser is clear that it’s aimed at a very specific type of person: “These are the kind of people that have an idea every minute. The idea for this campaign is to reach the next wave of D2C entrepreneurs and push them over the edge into actually starting their business. We want to be the ones to set them in motion.”

He's especially proud of the part of the campaign that’s using a novel twist on out-of-home, wrapping vacant storefronts with messages like, “That business you thought of three months ago could be here.”

He says that while the media depiction of a typical D2C start-up is “rich, white, male and arrogant,” the reality is quite different, at least according to Shopify data. People in their 50s are between three and four times more likely to start a business than a millennial, for example, and one of the most active segments is African American women.

But he says one surprising source of growth has been CPG companies, using Shopify to launch D2C businesses, often with some element of personalization. These include such companies as Johnson & Johnson, Procter & Gamble and Lay’s Potato Chips.  “They’re looking to find ways to experiment, so they don’t get disrupted again.”

And while fashion is Shopify’s biggest vertical, “we really exist for all kinds of small and medium-size businesses, and just fundamentally believe that adding more voices to the retail ecosystem makes the world a better place.”