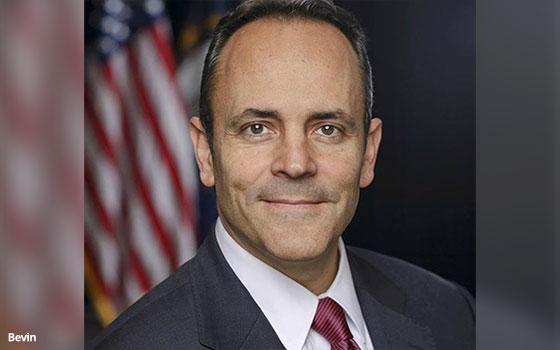 The ACLU is urging a federal judge to rule that Governor Matt Bevin violates the First Amendment by blocking critics on social media.

The legal dispute dates to 2017, when the ACLU sued on behalf of Kentucky residents Drew Morgan and Mary Hargis, who said Bevin blocked them on Facebook after they made critical comments. Moran said his comments related to Bevin's property taxes, which were overdue, while Hargis criticized Bevin's “right-to-work” policies and a job apprenticeship program.

The ACLU argues that the Bevin violates the First Amendment by censoring critics based on their viewpoints.

Last year, Van Tatenhove rejected the ACLU's request for a preliminary injunction against the governor. At the time, the judge said Bevin's use of Facebook was "personal," and he has no obligation to allow members of the public to comment via the platform.

The ACLU argues in its new court papers that the legal landscape has changed in recent months, as judges across the country have weighed in on questions surrounding censorship on social media.

“Numerous courts ... have held that the interactive spaces of a public official’s social media accounts are fora for First Amendment purposes and therefore entitled to constitutional protections,” the ACLU writes.

Among other examples, the organization points to a decision by U.S. District Court Judge Naomi Reice Buchwald, who ruled in May 2018 that President Donald Trump violates the First Amendment by blocking critics on Twitter.

Bevin is asking Van Tatenhove to reject the ACLU's request. The governor contends his social media policy doesn't discriminate based on viewpoint, but rather blocks people who “make obscene, abusive, or repeated off-topic comments.”

“It is time to put an end to this case, which is really nothing more than an attempt to wrest control over the Governor’s social media accounts away from the Governor and give it to those who desire to exercise a heckler’s veto by drowning out the Governor’s messages with a cacophony of obscene, abusive, or otherwise off-topic comments,” he writes.

But the ACLU counters that Bevin's interpretation of “off-topic” includes comments that are negative.

“Evidence obtained by Plaintiffs ... reveals that the Governor and his staff have indeed engaged in viewpoint discrimination in the name of keeping his Twitter and Facebook posts 'on topic,'” the ACLU writes.

The organization says its examination of 1,700 pages of screenshots of speech that resulted in people being blocked shows that nearly 90% of the messages were critical, while no more than 1% were supportive.

Bevin also argues that people who are blocked can simply create new social media accounts, and then use those accounts to interact with him.

The ACLU argues that suggestion is unacceptable.

“Even putting aside the fact that doing so violates the Terms of Service for both Facebook and Twitter and would expose those new accounts to deactivation, this argument ignores that many users would like to interact with the Governor in their own name, so that their many existing friends and connections may see those posts and potentially join in the conversation themselves,” the organization writes. “Plaintiffs should not have to create new fictional accounts to accommodate the Governor’s unconstitutional policy.”