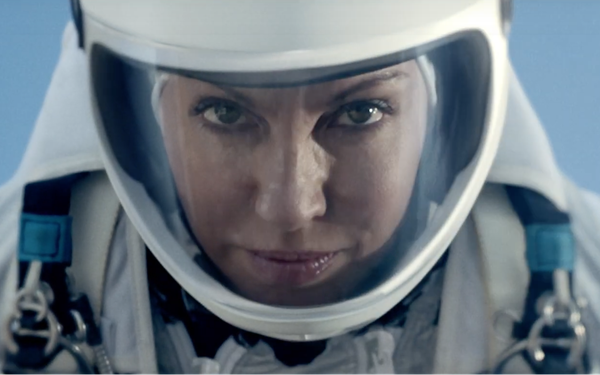 Nissan is showing the emotional experience of driving the 2019 Leaf Plus electric vehicle by comparing it to flying.

The driver seen in “Freedom to Move” is the same person who takes flight in the spot, professional wingsuit flyer Roberta Mancino. Clad in white, she is shown flying through the city, alternating with shots of the white car. The spot is from TBWA\Chiat\Day New York's via Nissan United, the dedicated multi-agency unit that Omnicom launched in 2013.

The media buy for the TV spot will focus on markets where electric vehicles are popular. The effort also includes social, programmatic, out of home and targeted direct mail. It will run through July and wraps up around the time that Nissan participates in its first Formula-E races on July 13 and 14 in New York.

The campaign, which breaks today, will also include a digital series showing how real consumers react to Nissan technologies like one-pedal driving with Leaf ePedal, the driver-assist technology ProPilot Assist and vehicle connectivity through the Nissan Connect App. Nissan takes a page from the Chevrolet “Real People. Not Actors” campaign, but instead of a lot of dialogue, focuses on drivers' emotional reactions.

“When you're looking at what are the best ways to explain complicated technology, we thought it would be great to do it in the voice of the customer,”  says Allyson Witherspoon, vice president, marketing communications and media, Nissan North America.

“So it's either an actual Leaf owner or EV intenders. We filmed them the first time that they were actually in the current generation Leaf and the Leaf plus, giving their very natural reactions. We got some really great content from them,” Witherspoon tells Marketing Daily.

The TV spot ends by playing up Nissan Intelligent Mobility, the corporate and brand vision rolled out a few years ago.

“It started showing up in advertising about a year ago, and what we're wanting to do is actually give it a little bit more prominence,” Witherspoon says.

The spot bears some similarity to Mazda’s “Dream Bigger” spot, which shows the Mazda3 driver going airborne while holding onto a red balloon. That spot debuted in April and the Nissan spot was already well underway in its development, Witherspoon says.

In March, the Nissan Leaf, which was introduced in 2010, became the first electric car in history to surpass 400,000 sales, solidifying its claim of being the best-selling electric vehicle of all time, which it plays up in the commercial. The company has announced it will bring seven new EVs to market globally by 2022.