HBO's Message To 'Deadwood' Faithful: This One's For You 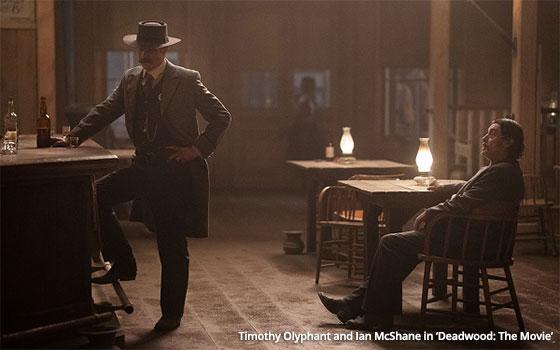 Without a doubt, the audience for whom HBO’s long-awaited “Deadwood” movie has been created is the faithful group who have waited 13 years for it.

To outsiders with little or no familiarity with this very special series, this two-hour, made-for-HBO movie, premiering Friday night, will not likely mean much. Nor might it even be penetrable.

But for everyone else, this movie serves as a reminder of everything that made the original “Deadwood” series so remarkable -- despite this movie’s idiotic title, “Deadwood: The Movie.”

Chief among its various attractive qualities is the colorful, profane, pungent language that writer/showrunner David Milch provides for this show’s sprawling cast of rough-hewn, uncouth characters. One of the singular joys of “Deadwood” was the experience of listening to this show’s dialogue -- a rare attribute in the television universe.

One of the other great strengths of this new movie, which comes some 13 years after the original series ended its third and final season, is the appearance of just about every character everyone will remember.

Somehow, all of these actors were available to film this follow-up, which takes place in the very real time frame of 13 years since the series ended. The timing was shrewd. These actors have all aged 13 years. Based on how the cast has aged, it would have been implausible to have had this new TV movie take up exactly where the show left off.

The year is now 1889 and the residents of Deadwood are poised to celebrate South Dakota statehood, a new state carved from what was formerly the Dakota Territory.

This event is the ostensible reason why some of the characters have found their way back. Others stayed. And in the 13 years since the show ended, their lives have evolved along with the town and the wild, untamed territory this former mining camp sprang from.

Not that the town of Deadwood has been tamed entirely in 13 years. On the contrary, conflict is still in the air over the area's mining wealth and other resources coveted by the ruthless George Hearst (Gerald McRaney). Now a U.S. senator from California, he is the chief catalyst for conflict in this new made-for-TV movie.

The TV Blog will now refrain from revealing anything else about the movie’s plot, instead inviting the “Deadwood” faithful to make this movie appointment viewing, and advising them to savor every minute of it.

For those of us in the know, “Deadwood: The Movie” emerges as one of the television highlights of the year. For everyone else who may have missed “Deadwood” the first time around, the TV Blog suggests watching all three seasons now available on various HBO platforms.

Along with a very small handful of other shows that were seen in roughly the same time frame, “Deadwood” is Exhibit A for the designation of the early- to mid-’00s as a new Golden Age of Television. It is not to be missed, and neither is this follow-up movie.