We may never know the extent to which Twitter helped him get elected and/or maintain a following from his base, but the President of the United States’ Twitter engagement appears to have, well, hit the wall.

Analyses released this morning by “Morning Joe” economic analyst Steven Rattner show the President’s Twitter interactions -- the percentage of his followers that either retweet or “like” his tweets — has plummeted since he was elected.

The number of interactions declined from 55 per thousand followers in November 2016 to just 16 per thousand most recently.

While Rattner’s analysis doesn’t cite Madison Avenue principles, such as reach and frequency or “wear-out,” it appears the President’s primary direct-to-consumer communications channel is suffering from the principle of oversaturation.

Rattner posed "the question of whether people are still paying as much attention to his tweets” on this morning’s “Morning Joe,” adding that while his Twitter interactions have been plummeting, the President has tripled the frequency of his tweeting.

“We’re in season seven of ‘Celebrity Apprentice,” quipped “Morning Joe” co-anchor Willie Geist, adding that “people are just tuning out at this point.” 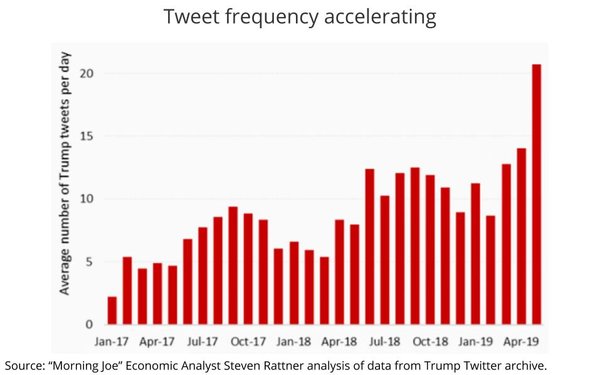 The number of times the President has tweeted "no collusion" and "no obstruction" have soared, ostensibly because his messaging isn't getting the same bang per tweet. 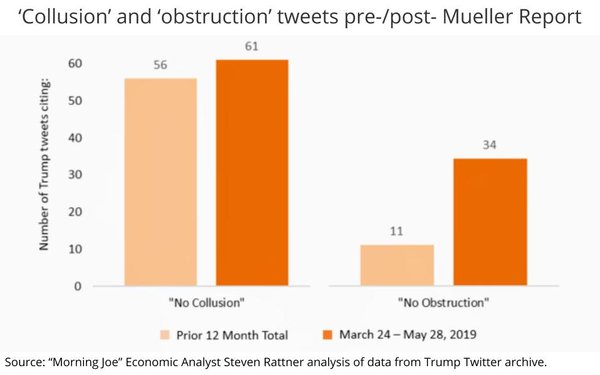