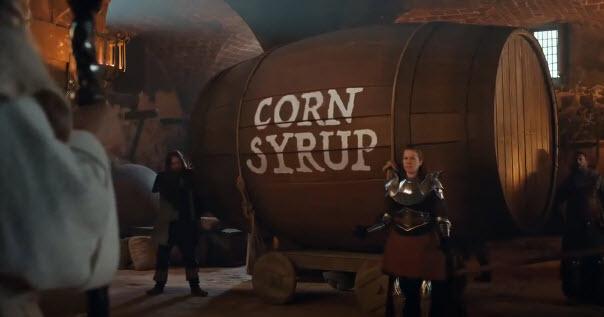 In the latest development in the ongoing beer “corntroversy,” a judge has temporarily enjoined Anheuser-Busch’s Bud Light from running most of its ads that allude to corn syrup in relation to competitive brands Miller Lite and Coors Lite.

One of those, “Special Delivery” (above), shows Bud Light’s medieval king character taking barrels of corn syrup mistakenly delivered to his castle to castles where Miller Lite and Coors Light are brewed.

The temporary injunction applies to Bud Light ads that mention corn syrup without also mentioning “brewed with” or “made with,” affecting two Bud Light ads and some billboards.

The judge also denied AB InBev’s motion to dismiss the case, citing his opinion that the ads were ultimately likely to be deemed misleading and damaging to MillerCoors.

“We are pleased with today’s ruling that will force Anheuser-Busch to change or remove advertisements that were clearly designed to mislead the American public,” MillerCoors CEO Gavin Hattersley said in a statement. “As the dominant market leader, Anheuser-Busch should be seeking to grow the beer category, not destroy it through deceptive advertising.”

In a statement, AB InBev also claimed victory, based on its ability to continue airing the “Special Delivery” spot. It also said it had already stopped using the billboards at issue.

The dispute has thrown a wrench into the beer industry’s plan to run a cross-brand marketing campaign to help address the beer category’s ongoing decline in sales.