In Nike Debut, Naomi Osaka Shushes All The Noise 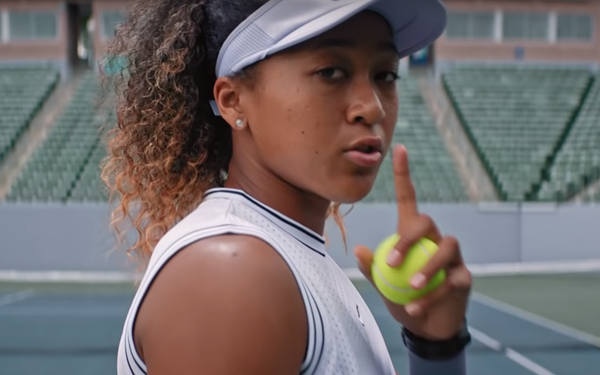 Naomi Osaka, currently ranked No. 1 in women’s tennis, uses her first Nike commercial to shut down all the noise surrounding her meteoric rise. In the spot, the 21-year-old phenom practices in an empty stadium, while reporters lob inane questions at her, in both English and Japanese.

They badger her about everything from tennis (“Who do you compare yourself to?") to her looks (“Don’t you think you should smile more?”) and her identity (“Do you consider yourself American? Or Japanese?”) Finally, Osaka stops the interrogation with a single “Shh,” holding her index finger to her lips.

And while many Nike spots end with the “Just do it” tagline, in celebration of that campaign’s 30th anniversary, or the “Dream crazy” tag from its current campaign, this one is a little fiercer: “Don’t change yourself. Change the world.”

Osaka is fighting to stay alive in the French Open. The subject of much sponsorship speculation after leaving Adidas last year, she announced her partnership with Nike last month. In that announcement, pointing out that Osaka is the first Japanese-born player ever to attain a No. 1 ranking, Nike said it is “thrilled” to have the two-time Grand Slam winner on its team.

“As we continue to inspire millions of athletes to chase their crazy dreams, Naomi is an incredible talent to add to our roster and help drive our commitment to inspiring a new generation of female athletes,” says Amy Montagne, Nike’s vice president and general manager of global categories, in the announcement.

Born in Japan to a Haitian-American father and Japanese mother, Osaka lives in Florida. Her deal with Nike, reported to be in the range of $10 million a year, is also said to include an upcoming streetwear line, in addition to tennis clothes.

Nike isn’t Osaka’s only sponsor. Last week, Mastercard announced it was partnering with her, marking the first time the financial-services brand has ever added a current No. 1 tennis player to its roster of spokespeople.