The Buddy System: Braava Mops Up After Talking It Over With The Roomba Vacuum 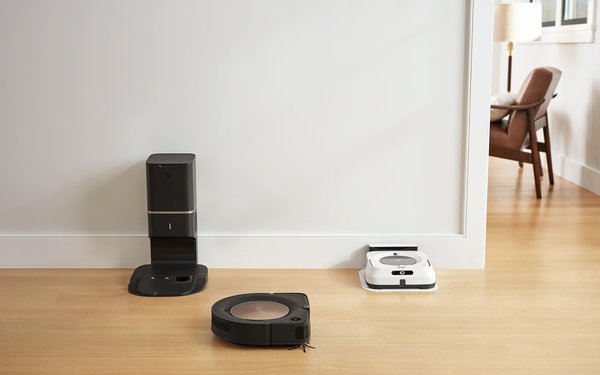 The maker of the Roomba robotic vacuum cleaner and the lesser-known Braava robotic mop have now introduced two models that work together without running into each other, a feat even humans can’t always achieve.

The Roomba s9+ and the Braava jet m6 robot mop, both made by iRobot, are designed to clean up “multiple rooms and large spaces with advanced navigation and mapping capabilities,” according to the company. The two robots use Imprint Link Technology to “talk to each other.” First, one vacuums. Then the other mops.

“The robots will not bump into each other because the Roomba cleans first and then the Braava jet will mop second. The robot is smart enough to know not to go on carpets or rugs,” a spokesman explained to Marketing Daily.

And get this: Like the previous model, this Roomba cleans itself. It empties the carpet dirt into a dustbin that holds it in a sealed pouch until the homeowner empties it.

Users can initiate an automated sequential cleaning in the iRobot Home App, choosing specific rooms or the whole house. Users receive notifications when vacuuming and mopping are complete and can communicate via app, Alexa or Google Home.

The  first Roomba rolled into living rooms in 2002 and the Braava in 2013. IRobot says it has sold 25 million robotic units worldwide. The United States is the largest market for the Bedford, Mass-based company started by MIT roboticists in 1990.
.
The company has advertised in the past, and received word-of-mouth endorsements from  HGTV personalities. The spokesman said he was not aware of any new commercials for these latest models.

The company has introduced improvements over the years to make its robots more self-sufficient. The latest Roomba incarnation has a new anti-allergen system, better brushes, and, well, it sucks more, with four times more suction than the previous model. The Braava is intended for larger spaces and uses advance navigation, among other upgrades.

"In 2018, iRobot brought robot memory and automatic bin emptying to the Roomba robot vacuum, ushering in a level of hands-free cleaning automation not previously realized in consumer robots," said Colin Angle, chairman and CEO of iRobot, in a press release. "With the launch of the Roomba s9+ and Braava jet m6, iRobot has achieved another automation milestone for home robots.”

Milestones aren’t usually inexpensive. Though robot cleaners have gotten cheaper through the years, the Roomba s9+ robot vacuum, with Clean Base Automatic Dirt Disposal, retails for $1,400.The Braava jet m6 robot mop costs $500. Both are available now, online at iRobot’s site, and in stores the week of June 9.