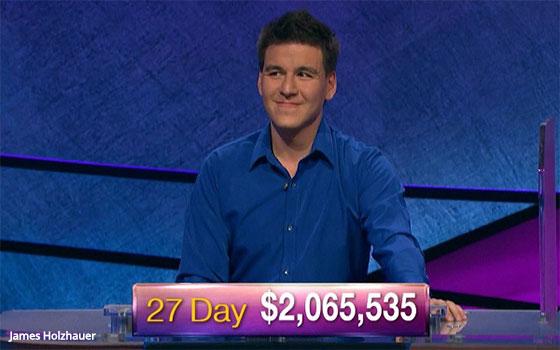 “Jeopardy!” superman James Holzhauer is vexing some, delighting others and scoring where it counts -- in the syndication ratings.

Welcome to Day 32 of "'Jeopardy!’ Held Hostage." To be clear, “Day 32” refers to the day this TV Blog is to be published -- Friday, May 31 -- even if it is being written on the morning of Thursday (May 30) before the results of Thursday evening’s “Jeopardy!” competition is even known, much less the results for Friday evening either.

In fact, we only have Day 30 of Holzhauer’s winning streak -- Wednesday evening's show -- on which to base this blog.

But what are the odds this “Jeopardy!” phenom will go down in defeat on either Thursday or Friday? The odds seem slim indeed, but not impossible. And if he does lose and then renders this blog obsolete (at least in part), then so be it. But the odds do not favor that happening.

Except for a very small handful of close calls -- perhaps twice? -- since his remarkable run began in April, Holzhauer has had victory well in hand by the time each game’s “Final Jeopardy” round has come around.

Often, it has been obvious much earlier that he could not be caught, as he built huge gaps in money winnings in “Double Jeopardy” between himself and his nearest competitor -- gaps that soon became insurmountable. Through Wednesday evening, Holzhauer had vanquished 60 other contestants, all of whom were deemed smart enough to appear on “Jeopardy!” in the first place.

As many have observed, this 34-year-old professional sports gambler from Las Vegas is winning because of his seeming mastery of two key aspects of the “Jeopardy!” game. Most notably, he seems to possess one of those rare brains that can only be described as encyclopedic.

While many of us can cite various areas of knowledge in which we don’t excel (mine, for example, include Shakespeare and the lineage of English royals, to name two of many), Holzhauer seems to have no knowledge gaps or weaknesses significant enough to derail his streak.

The second thing he possesses is a talent for wagering born presumably from his profession. With confidence in his ability to answer the questions correctly, he goes farther in the money amounts he risks than perhaps any contestant in the whole history of “Jeopardy!”

His successful “Daily Double” bets have become the stuff of quiz-show legend. They are the instances in each show in which he tends to run away with each game as the money piles up.

The problem for some is that his lopsided victories rob this game of the suspense that has often been one of its most attractive features, as close games go into the “Final Jeopardy” round with no obvious victor until the final wagers and answers are revealed.

“What are they gonna do with this Holzhauer guy on Jeopardy?” read one typical Tweet this week. “The games are so one-sided that it's not even that interesting to watch. … This is like Tom Brady vs a PeeWee team.”

In a somewhat related vein, a Holzhauer supporter tweeted: “Heck no! He is the Patriots of Jeopardy! Long live Holzhauer!”

Whether they are tuning in to see him extend his streak or be toppled, the Holzhauer winning streak has been a boon to the show's viewership. Ratings have been on the rise ever since his streak, along with his astonishing, record-breaking nightly money totals, began to look like they would have staying power. He passed the $2 million mark in total winnings this past Monday night (pictured above).

Earlier this month, for example, “Jeopardy!” ratings increased 11% in the first measurable week of May to the highest levels the show had seen since 2005, according to reports.

When watching Holzhauer, it is reasonable to wonder how on earth anyone will topple him. It will either happen on a night when he suddenly is beset with categories he knows little about (which does not seem possible) or someone comes along who is just as good at this game as he is.

But since he very well could be the greatest player to ever play this game, what are the odds that some other wunderkind will show up any time soon?