This Bud's For [Favorite NFL Player Here], As League Loosens Its Policies 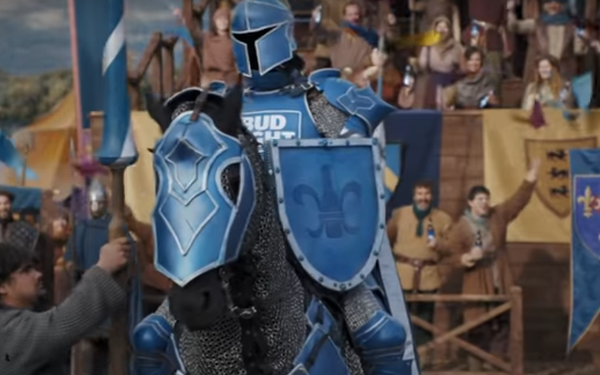 The NFL has loosened its advertising policy to allow current players to appear in beer advertising for brands that have marketing partnerships with teams -- although players still can't overtly endorse the products, reports Morning Consult, which broke the story.

The rules for wine and spirits brands have also been loosened. Those categories still can’t use players in ads, but they can now license to bill themselves as the “official” beverages of their type for an NFL team. Spirits brands can use use the team logo on packaging, and wine brands no longer need to tie use of a club's mark on bottles to some major team event, like an anniversary.

The NFL sent out the new policy -- which goes into effect this season -- on Tuesday to teams and marketing executives employed by clubs and beer, wine and distilled spirits manufacturers, according to the report.

Bud Light is the official beer of the NFL and stands to benefit most directly from the changes in policy. The brand's maker,  Anheuser-Busch InBev, previously succeeded in lobbying pro basketball and baseball leagues and players to ease alcohol ad restrictions, but because of football's higher viewership, the changes to NFL ad rules are bound to get more attention.

“Anheuser-Busch’s landmark agreement with the players’ association for the NBA and MLB was a first for the alcohol industry. With the NFL’s recent announcement, we now have rights to partner with active players in the three biggest leagues in the U.S.,” said Marcel Marcondes, U.S. chief marketing officer for AB InBev, in a statement to Marketing Daily. “Through these agreements, A-B brands have the opportunity to connect with fans in new ways -- not just to highlight these players as great athletes, but more importantly, as great people. This is a win for fans, the league and its players as well as the sponsors.”

According to Morning Consult's sources, in addition to requiring that any NFL players in ads must be current players, the new ad rules state that the players must be shown in uniform, and that creative materials cannot imply that players are endorsing the product. Also, if a beer brand wants to use more than one player in an ad, it has to use a minimum of six players. For printed ad materials, brands must use licensed Associated Press action shots of players in uniform.

Big beer brands obviously hope that associating themselves with NFL stars will help jump-start their sales, which continue to suffer as young adults in particular shift to craft beers, spirits and wine.

The new rules come even as the NFL continues to get battered by bad publicity generated by some players' abuse of alcohol or drugs.

One visible case in point: Johnny Manziel, the star college quarterback and first-round draft pick by the Cleveland Browns in 2014, who left the NFL after two years following well-documented instances of alcohol abuse. “Going back throughout the last couple years of my life, I was self-medicating with alcohol. That’s what I thought was making me happy and helping me get out of that depression to a point where I thought I had some sense of happiness,” he said in a 2018 interview on “Good Morning America.”

But alcohol is a big part of the NFL scene, from tailgate parties to packed bars on game days -- and of course, the in-game ads.