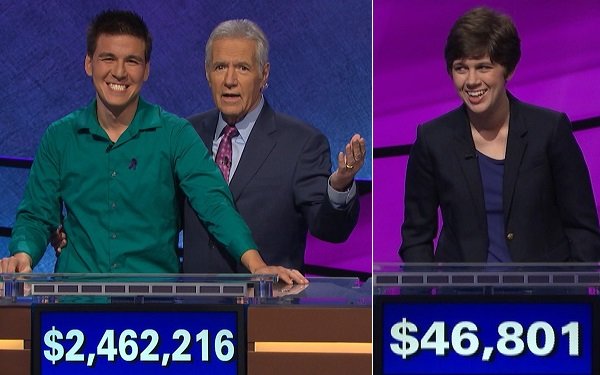 It was an exciting show, and the one “Jeopardy!” fans have been tuning in to see -- and hopefully be a part of -- ever since James Holzhauer's amazing winning streak began to take shape in April.

However, unfortunately for many, news items ricocheted and multiplied across the Internet starting on Sunday that someone had leaked video footage of the conclusion of Monday's show, revealing far in advance of its airing that Holzhauer would be dethroned.

The stories contained various details that were so specific that they left little doubt the stories were true. As a result, if you read the stories, then you knew the outcome of Monday night's show.

It was possible, if not entirely logical, to doubt the veracity of the stories and hope for an outcome that would play differently, with at least some surprises. But no -- the ending happened exactly as the stories said it would, right down to the name of the new champion -- Emma Boettcher, a library professional from Chicago (pictured above, along with Holzhauer and host Alex Trebek).

One could argue that the news organizations that posted the stories based on this small piece of video were culpable in this process of suspense spoilage that undermined what should have been a stellar night of fun TV.

But in the world of news, the thinking usually goes like this: If we don't publish this story, someone else will, and then we will feel as if we passed on -- and were consequently beaten on -- a great story.

That line of thinking is not necessarily excusable, but this is what news organizations do. The blame for this leak -- if this is what it was -- belongs squarely with the person or persons who felt it was appropriate to disseminate this video with no regard for how anyone else might feel about it.

But this is the culture we have wrought. Cloaked in the anonymity the Internet offers, it is possible to post anything anywhere with almost no chance of being discovered.

Yesterday, no news could be found online about the identity of the leaker or even whether Sony Pictures Television, producer of “Jeopardy!,” had embarked on a full-on search for the perpetrator, especially if the video could be identified as having come from within the show’s production staff.

Or maybe someone in the show's studio audience surreptitiously recorded the show on a cell phone -- although this would seem to be nearly impossible given the small size of this show's audience. Such a person would almost certainly have been seen and caught in the act of recording.

As for the show itself, this new champion is to be congratulated for dethroning a champion who seemed invincible. It is true that Holzhauer's loss was due in part to a deviation from his usual strategy -- betting less than what he would normally wager in a “Final Jeopardy” round, and as a result, falling short of a victory when he and the new champion both had the correct answer.

It is also true that he trailed this new contender going into the final round, which was rare indeed for him. As a professional gambler, he possibly already knew that if she had the correct answer, and wagered accordingly, there was no way he would beat her, no matter what he wagered.

And so, the James Holzhauer era on “Jeopardy!” has come to an end. By December, when some of us are compiling our lists of the year's top stories in television, “Jeopardy!” will surely be there.