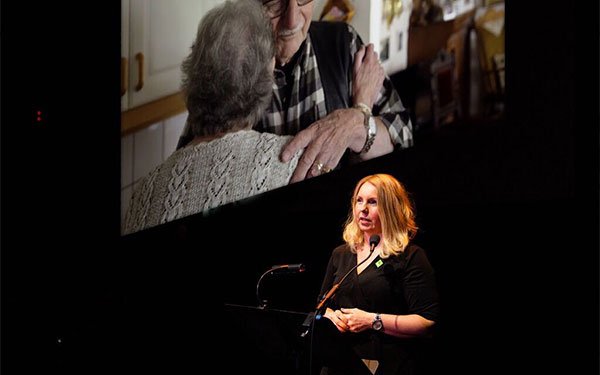 Pop-Up Magazine’s sponsors integrate with the storytelling-style of the show. The tour — which features a live journalism format with storytellers from film, print, audio and photography — p ut on eight shows in seven cities.

Google’s segment was an example of how brands can be part of the show. Biomechanical engineer and researcher Anne-Christine Hertz presented her invention to help people suffering from dementia.

Called BikeAround, it uses Google Street View projected on a screen and a stationary bike, giving patients the opportunity to take a virtual ride down streets that can conjure up memories, such as a childhood neighborhood.

“We use the Google Street View to motivate people with dementia to exercise more in a safe and secure way," Hertz told Publishers Daily.

“What we attempt to do with our sponsors is we want to bring them into the Pop-Up Magazine experience, using the same techniques and approaches to storytelling we do with any of the other pieces,” he said.

The formats range from live photo essays with Coach and Lexus, to a live, custom crossword puzzle with Warby Parker. Another previous sponsorship from Allbirds had envelopes with eucalyptus tree fiber — what its shoes are made from — tucked into the program and opened by the audience during a brand presentation.

This year’s message from Google was a particularly personal one.

BikeAround is part of Google’s “Search On” series that tells inspiring stories of people using technology to solve big problems.

The technology is currently being developed for the market by Camanio Care.

Hertz, a manager at the Health Technology Center in Sweden, was motivated to find some relief for dementia patients when her grandmother was diagnosed with the disease. She was inspired by Google’s Street View feature, as well as bikes, because her grandmother, like many Swedes, use them often to get around.

It started out as a demonstration, but Google got wind of the project, and produced a video around it called “Riding to Remember,” which was presented as part of the performance by Hertz at the Pop-Up Magazine event.

While there is no cure today for dementia, physical activity can help stimulate both physical and mental abilities for those suffering from the disease.

Hertz said she has seen people cry in the front row at some of the shows during her presentation. After the show ends, audiences and presenters mingle in the venue’s lobby. Hertz said “a lot of people were coming up to me and talking about their own stories, how their own families are struggling with dementia and if they can do anything to support our project.”

“Most of the time brands think of marketing as the opportunity to announce a new product or feature, and it's a very kind of rational approach to marketing,” Edwards said. “But there is a higher-level, emotional experience when a brand takes us out of the product and into the world.”

It also shows audiences the other work Google is doing beyond its search engine, Edwards added.

Every winter, spring and fall, Pop-Up Magazine goes on a U.S. tour with different contributors, themes and audiences. The live shows are not recorded.