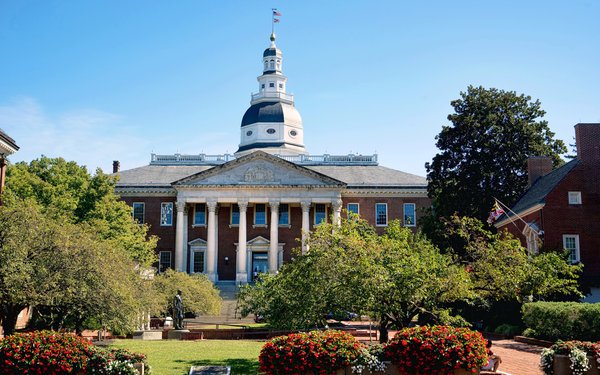 TV broadcasters, cable companies, and news organizations are weighing in against a new Maryland law that requires news sites to post information about political ads.

In papers filed late last week, the News Media Alliance and others -- including the Associated Press, Dow Jones and New York Times Company -- argue that the "Online Electioneering and Transparency Act” violates the First Amendment by regulating political speech online.

The law which took effect July 1, requires online news sites (and social media platforms) with more than 100,000 unique monthly users to post information about political ad buys, and to make records available to the state election board. Maryland passed the law after it emerged that Russian operatives purchased ads on Google, Twitter and Facebook, in order to interfere with the 2016 U.S. presidential election.

Soon after the law took effect, Google said it would stop accepting political ads in Maryland.

In January, "The Washington Post," "Baltimore Sun" and other newspapers obtained an injunction prohibiting the state from enforcing the law against news sites.

U.S. District Court Judge Paul Grimm in Maryland, who granted the injunction, wrote it was “evident” that the law implicates the First Amendment's guarantee of freedom of the press. He also said the statute was too broad, because it applies not only to the large social media platforms on which the Kremlin previously purchased ads, but also to news sites that weren't targeted by foreign operatives.

State officials recently asked the 4th Circuit Court of Appeals to reverse Grimm's ruling and lift the injunction. The Maryland officials say the government has a legitimate interest in preventing foreign interference in elections, and in “electoral transparency.”

Maryland officials also contend in court papers that the bill merely subjects online sites to the same obligations as radio and television broadcasters.

But the News Media Alliance and other news organizations counter that the “historic justifications” for regulating broadcast and cable don't apply to the internet.

“Broadcast regulation was based on the concept of spectrum scarcity and the need to avoid electromagnetic interference,” the groups write in a friend-of-the-court brief filed with the 4th Circuit Court of Appeals. “Cable regulation was premised on that medium’s use of public rights-of-way under a dual system of federal and local regulation. ... Maryland does not -- and cannot -- suggest that these same conditions apply to the Internet or online platforms.”

The News Media Alliance adds that the law imposes the types of regulatory burdens that could affect news sites' ability to accept political ads.

“The health of news industry increasingly depends on the ability to build financially sustainable online platforms, and local and regional newspapers will likely be especially hard hit if forced to choose between forgoing accepting online political advertisements or taking on the financial burdens of compliance,” the organizations write.

The National Association of Broadcasters and the NCTA -- the Internet & Television Association are also urging the 4th Circuit to continue blocking the law.

“The Act abridges the First Amendment rights of online publishers in two distinct ways: by compelling them to speak by publishing and continually updating information dictated by the state about each political advertisement they accept, and by imposing onerous record keeping requirements,” the NAB and NCTA write in a separate friend-of-the-court brief.

The groups say some of their members -- including ones that provide online content and sell online advertising -- have already been affected by the law.

“Certain NAB and NCTA members report that regulatory complexity and uncertainty created by the Act has forced them to suspend all of their qualifying online political advertising sales in Maryland,” the organizations write. “Other NAB members, especially small broadcast stations with online platforms, face a similar calculus.”

The 4th Circuit is expected to hear arguments in September.