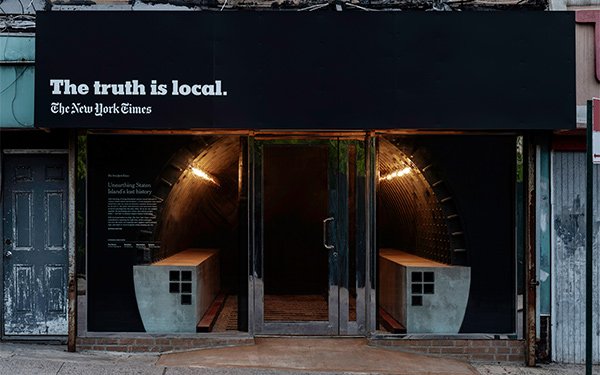 The New York Times launched a campaign in New York today to bring attention to its city coverage and appeal to its hometown for support via subscriptions.

The campaign includes installations in vacant storefronts in each of the city’s five boroughs, a television ad with six Times stories on the city (such as one on the MTA) and a billboard on the former New York Times building in Times Square.

The campaign comes a month after metro editor Cliff Levy announced the creation of a new Metro investigative unit at the Times.

It also comes at a time of crisis for the local news industry. In the past 15 years, 1,800 newspapers have shuttered. About 200 counties have no local newspaper, and roughly half the counties in the country have only one, according to a University of North Carolina study.

That leads to communities living in are called “news deserts.”

One of the Times' installations is located on Atlantic Avenue in Brooklyn; it is set up to look like a New York jail cell. It highlights reporting from Frances Robles, who discovered a homicide detective and the District Attorney’s office were using fake confessions, discredited witnesses and other tactics to incarcerate innocent men. The investigation, “Review of 50 Brooklyn Murder Cases Ordered,” led to the overturning of about a dozen murder convictions.

Near Chelsea, another installation showcases Brian M. Rosenthal’s reporting on city taxi drivers forced into debt, with stories like "They Were Conned’: How Reckless Loans Devastated a Generation of Taxi Drivers.”

Users can scan a QR code with their phones at each installation to access audio clips from Times journalists on the stories that inspired the storefronts.

This week, a special New YorkTimes section with a city summer guide will be handed out near the installations. They will also include a $2-a-week home delivery offer for new subscribers.

The Times’ TV ad will air on linear, streaming and online. It highlights reporting from Emma G. Fitzsimmons, Brian M. Rosenthal and Michael LaForgia on the MTA which revealed city and state officials were neglecting the subway system.

The Times also has a new Local Edition Collection of merchandise available in the The New York Times Store. The products were created with local suppliers.