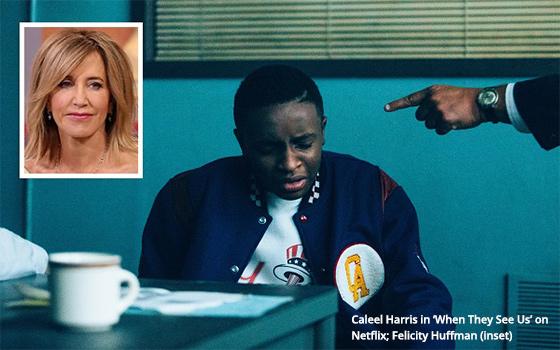 The prosecutor in the infamous “Central Park Five” case in New York ripped a new Netflix dramatization of the case in a blistering op-ed piece published Tuesday in The Wall Street Journal.

“Netflix’s False Story of the Central Park Five” was the headline on the commentary penned by Linda Fairstein that was splashed across the full width of the page and filled nearly the top half of it -- a position of prominence known in newspaper parlance as a “page lede.”

Fairstein, 72, was a sex crimes prosecutor in the Manhattan district attorney's office from 1976 to 2002. She achieved a level of notoriety and fame in her career as a prosecutor that was sufficient for her to embark on a new career as an author of crime novels, some of them bestsellers.

But her public image has suddenly taken a nosedive in the aftermath of the premiere of “When They See Us,” a four-episode series about the 1989 case that premiered May 31 on Netflix. It was directed by Ava DuVernay.

In the series, Fairstein, played by Felicity Huffman, is reportedly portrayed as overly zealous, if not racist, in her prosecution of the five teens who were eventually convicted for the crimes that came to be known as the “Central Park jogger case.”

Accusations that the five were coerced into issuing various confessions of their roles in the crime -- the rape and severe beating of a young woman who was out for a run in New York's Central Park -- have dogged the case for years.

Their convictions were vacated in 2002 by a New York State Supreme Court judge, citing new evidence in the case -- mainly a confession from another man who said he was the sole assailant in the case.

Still, despite the vacated convictions and this new confession, some who were involved in the case, including Fairstein, insist that evidence suggests the five men were involved -- and not only in that assault but in other assaults that took place that day in Central Park.

In her op-ed piece, Fairstein accuses the makers of the TV series of fabricating many of the details of their version of the story, particularly as the details pertain to Fairstein's role in the prosecution.

The Netflix series, Fairstein writes in the WSJ, is “a series so full of distortions and falsehoods as to be an outright fabrication. … Ms. DuVernay's film attempts to portray me as an overzealous prosecutor and a bigot, the police as incompetent or worse, and the five suspects as innocent of all charges against them. None of this is true.”

Fairstein then goes on to detail a number of instances where the TV series gets the facts wrong -- basically replacing them with other “facts” that are wholly made up. These include dates, times, statements that Fairstein is alleged to have uttered, and a host of other things.

Fairstein backs up her assertions by noting that they are all “supported by sworn testimony” given by more than 95 witnesses (including the five defendants) in court and various investigations into the way the case was handled.

Her op-ed is unusual because most people in her position -- that is, people in a position to have an important story in their life told in movie or TV form -- are often advised to react with silence to such portrayals when they are negative. This, the theory goes, helps shorten the lifespan of the news- and social media backlash that might ensue. Be silent and the story goes away faster.

But Fairstein is apparently frustrated at the backlash aimed at her. Among other consequences, her book publisher, Dutton, dropped her earlier this month over this portrayal of her in a made-for-TV production that Netflix bills as “based” on a true story.

If Fairstein intends this op-ed piece to be the first salvo in an ongoing media campaign to clear her name, then so be it. As it happens, the series' director and cast have been taking the usual victory laps in the media ever since the show started streaming.

The whole controversy feels depressingly familiar. In multiple movies and TV shows for decades, filmmakers have long stretched the truth or replaced it with their own “truth” in the name of “storytelling.” They somehow believe that the changes they make create a greater truth than actual facts do.

To which a critic almost always responds: Facts are facts. Why change them?