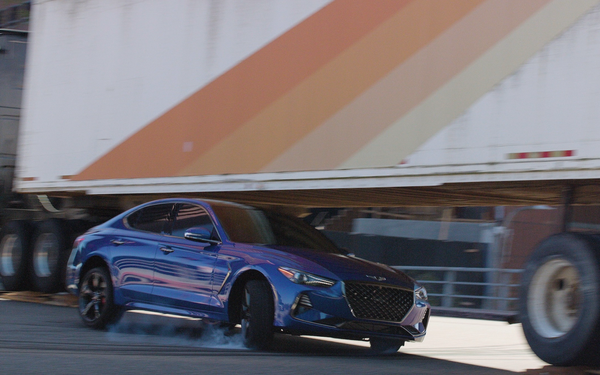 Created by agency of record Innocean USA and Donut Media, “The Art of the Stunt” video series will run for three weeks. Two videos will be released each Wednesday featuring reenactments from "The Fast and the Furious," "Baby Driver" and "Drive."

In the videos, viewers get a look at how these difficult, over-the-top car stunts come to life.

The first video, released last week, is based on a stunt from "The Fast and the Furious." Stunt driver Tanner Foust drives at top speeds and has to squeeze a 15.3-foot Genesis G70 into a 22-foot gap under a semi-trailer big rig.

The series includes a 10-minute behind-the-scenes video and a 30-second stunt-only video. The long-form video has nearly 400,000 ,views while the cutdown has more than 48,000 views.

Academy Award winner Robert Nagle, a top stunt coordinator in Hollywood (his work includes "Black Panther" and "Spiderman: Homecoming"), coordinated each of the stunts. To reenact these moments successfully, he brought in Foust, a four-time X-Game champion and world-record holder.

Episode two will show Foust recreating a staple of action films, “Threading the Needle.” He will maneuver the Genesis G70 through a tight space between a truck and a wall at a high speed, all while maintaining the ultimate control. Episode three shows Foust achieving a “180-reverse-to-Drift” maneuver.

The Genesis G70 luxury sport sedan is aimed at enthusiasts who prefer a high-performance driving experience, says Megan Gillam, Genesis senior group manager, corporate planning and product strategy. The video series serves as proof those qualities are abundant in the G70, she adds.

Genesis has not been marketing its vehicles since it spent most of 2018 transitioning away from its previous dealer network of some 840+ dealers to a more focused retail network of approximately 350 Genesis retailers, Gillam says.

“As we neared the completion of this transition, and the launch of our all-new G70 called out for attention, we’ve naturally ramped up our marketing efforts,” Gillam tells Marketing Daily.  “More thought-provoking and exciting stories are yet to be told about our growing Genesis portfolio of products, and they’ll reveal themselves over time.”